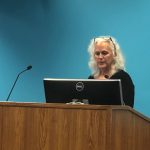 The Lawrence school board will consider giving initial approval to its 2019-2020 school year budget during its next meeting on Monday.

Each July, the board is required to approve its budget for publication with a maximum budget authority. If approved, the publication will also set a public hearing for the budget during the board’s following meeting at 6 p.m. Aug. 12.

Earlier this month, Kathy Johnson, executive director of finance for the school district, reported to the board that the school district received an increase of about $4.3 million of funding from the state Legislature and local property taxes.

With the new funding, the school board is expected to consider a $105.4 million overall budget on Monday, which is about $4.3 million more than last year’s $101.1 million budget, according to board documents.

The school district and the local teachers union are currently negotiating a new contract for the 2019-2020 school year. Kelly Jones, board vice president and a member of the negotiating team, said the team has discussed a teacher compensation package between $1.4 and $3 million.

Johnson said if the school district approved a teacher contract worth more than the available $1.7 million, it would need to make cuts elsewhere to make up the difference.

In other business, the school board will consider taking a stand against working with a U.S. agency responsible for detaining undocumented immigrants.

The board will consider approving a resolution that states it “objects to Immigration and Customs Enforcement making any attempt to utilize the public schools to interview students or otherwise gather information on potentially undocumented students and families.”

Consideration for the resolution comes about a week after local activists organized a rally and urged Lawrence officials to approve ordinances aimed at protecting immigrants, including measures that would restrict the Lawrence Police Department from cooperating with Immigration and Customs Enforcement.

Noting that the U.S. Supreme Court has ruled undocumented immigrants are granted the right to public education, the proposed resolution states that the school board is opposed to the agency taking any action to interfere with its students’ education and it would take “the appropriate action” to protect students and their families.

The board will meet at 6 p.m. Monday at district offices, 110 McDonald Drive.