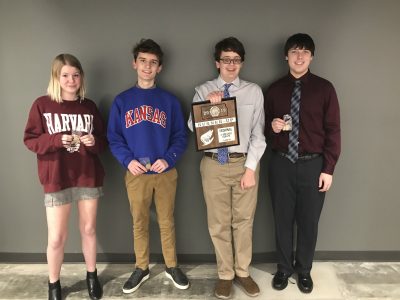 Members of Free State High School’s debate program had their work cut out for them this weekend when they faced the juggernaut of Washburn Rural High School, Coach Kelly Thompson told the Journal-World on Monday.

Although they couldn’t best the defending three-time state champions from Topeka, the team did enough to qualify for a trip to the state tournament next month, he said.

“We had an incredibly tough regional tournament,” Thompson said. “We were really happy to get out of it.”

Free State’s 4-speaker debate team came in second place behind Washburn Rural at the six-team regional tournament Saturday at Lawrence High School, allowing both to qualify for the state tournament. The other four high school teams at the tournament, which did not qualify for state, included Olathe Northwest, 3rd; Mill Valley, 4th; Lawrence, 5th; and Topeka, 6th.

Free State’s 4-speaker team will get another shot at Washburn Rural and the other best 6A 4-speaker debate teams at the state tournament on Jan. 17-18 in Hutchinson. The team consists of junior Ethan Harris, junior Jack Bellemere, sophomore Serena Rupp and sophomore John Marshall.

Thompson said his debate program was no stranger to the state tournament, as one of its 2-speaker teams won the state championship in January of this year. However, this season’s teams are made up of a younger crop of students who are out to prove their abilities, he said.

“We’re the defending state champions, but we’re in this position of calling ourselves the ‘underdog defending champions,” Thompson said, noting the team graduated five debaters last school year and only has one senior currently in the program. “We’re really young. Sometimes that youth hurts you.”

Thompson said the goal every year at state was bringing home trophies, which are awarded to the teams that place between first and third. But the upcoming tournament will also be a great chance to gain experience for those younger performers.

“We know we are young and almost everyone we are taking to state are coming back next year,” he said. “We are going to do our best and hope it works out for us.”

Thompson said the debate topic is whether “the United States federal government should substantially reduce Direct Commercial Sales and/or Foreign Military Sales of arms from the United States.”

Although LHS’s 4-speaker team did not qualify for state, coach Jeff Plinsky said he was proud of how the program’s teams fared this season. The 4-speaker team that competed on Saturday included senior Daniel Davidson, senior Amelia Vasquez, junior Joel Rose, and sophomore Jenna Riggins.

“We’ve taken some big leaps,” Plinsky said of the LHS program. “This is the first year in a long time we’ve had students that have been really competitive at the top levels of debate.”

LHS’s state hopes aren’t dashed completely. The state tournament allows each debate program to enter up to four 2-speaker teams without qualifying through a regional tournament. Both LHS and FSHS will enter teams for the competition.

Plinsky said he expected the LHS program to perform better at the 4-speaker regional tournament and the 2-speaker competition would give it an opportunity to improve on that.

“We’ll have to make some adjustments in terms of strategy and our approach,” Plinsky said. “We’ve got more work to do. We’ll see what happens.”

The 2-speaker teams from Free State that will participate in the state tournament are:

The LHS program plans to take either three or four 2-speaker teams to the state tournament, Plinsky said. The students who will compete for those teams are not yet determined.

A previous version of this story misidentified several members of the LHS 4-Speaker debate team. They are Daniel Davidson, Amelia Vasquez and Jenna Riggins.