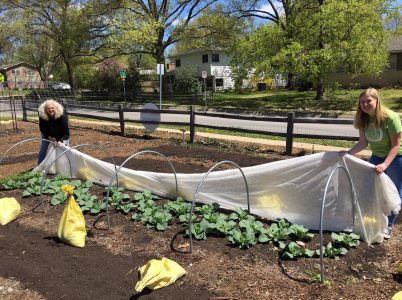 In this file photo from April 2019, Nancy O'Connor, left, director of Education and Outreach with The Merc, and Elise Gard, a student gardener with the Growing Food Growing Health project at West Middle School, 2700 Harvard Road, remove the plastic protecting plants at the school's garden.

Along with math, science, history and other important topics, Lawrence’s West Middle School aims to educate students on how to be active members of their local community, said Principal Brad Kempf.

And now the school is being recognized for it.

The Kansas State Department of Education’s Civic Advocacy Network, or CAN, recently announced in a news release that West Middle School is one of 10 state schools to be awarded for offering programs that aim to increase civic engagement among students. The Lawrence school received the Promising Practices Award, which is given to schools that have a “particularly innovative, effective or unique program that shows potential for impacting student engagement,” according to the release.

Kempf told the Journal-World on Monday the school’s staff believes it is important to teach students different ways to be engaged in their communities.

“It’s all about having a stronger community and being active in our community — not just at West Middle School, but the Lawrence community at large,” he said.

One of the most prominent programs the school provides is its Growing Food Growing Health program, a community garden partnership with the Merc Co-op that allowed students to raise fresh produce and then sell to local consumers. However, Kempf said the program recently began donating its harvest to Just Food, a local food bank, aiming to provide fresh food to the local community in need.

The Journal-World previously reported that the program aimed to raise 2,000 pounds of produce for Just Food during the most recent growing season.

Some other programs the school offers include Hawk Flock Leader Development Program, which aims to train students to be leaders by challenging them to engage with parents and other community members to develop positive school culture and serve as guides to incoming sixth grade students; and the Student Instructional Program, which is a course students may take during their advisory periods that teaches the students on monthly themes, including community, responsibility, integrity, respect and empathy, among other themes.

Kempf said he finds it “humbling” to be a principal of a school recognized for its civic engagement.

“It really (shows) the body of work that our teachers and students do on a day-to-day basis,” he said. “It’s not just one program, it’s multiple things that are going on in the building that are great and being recognized.”

In its second year of administering the awards, the department said the ultimate goal of the awards is to promote civic engagement as part of the educational experience for all K-12 students in Kansas. Other state schools selected to be recognized include Seaman High School in Topeka, Shawnee Mission Northwest High School, and Santa Fe Trail Middle School of Olathe, among others.

The state’s education department will honor West and the other schools on Sept. 17, which is the U.S. Constitution Day. The event begins at 1 p.m. and will be held at Memorial Building Auditorium, 120 S.W. 10th Ave. in Topeka.