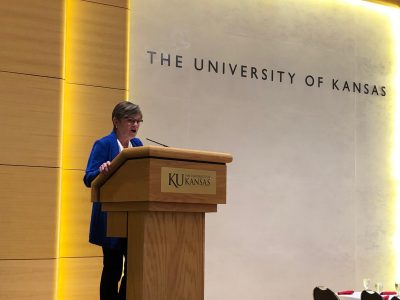 Kansas Gov. Laura Kelly speaks during a conference on Wednesday, Aug. 14, 2019, at the University of Kansas, which aimed to allow Kansas educators and businesses learn more about NASA.

Today’s educators are teaching students who will one day establish living quarters on the moon or even travel to Mars.

That’s according to Sam Ortega, of NASA’s Marshall Space Flight Center, who told the Journal-World the federal space organization thinks it’s important to offer resources to K-12 educators and college faculty because they are helping to create a pipeline of workers who could soon expand space exploration.

“They are creating the workforce that is going to make it possible to live on the moon by 2028 and beyond,” Ortega said of educators. “We’re making sure they have the ability to inspire and generate STEM-focused individuals.”

Ortega was one of many NASA representatives who visited the University of Kansas on Wednesday to meet with hundreds of Kansas teachers, college faculty and businesses to help those groups understand how they can interact with NASA.

The conference — which was organized by former state Rep. Tom Sloan, a Republican from Lawrence — offered a number of panel discussions allowing those groups to learn from NASA personnel. Sloan said he hoped the event would help those groups build relationships and provide resources for one another.

During the event’s keynote address, Kansas Gov. Laura Kelly told the audience that building those relationships was key to the state’s success.

“When we work together, Kansas becomes a place where businesses and academics grow and thrive,” she said.

Kelly noted that the creation of NASA occurred under Kansan and former President Dwight D. Eisenhower. But that’s not the only connection between the state and the organization. She pointed out that some astronauts grew up in or were educated in Kansas and that the Cosmosphere space museum is located in Hutchinson.

“Clearly Kansas has proven itself as a state where space innovation is born,” she said. “It’s where passionate individuals work hard to make sure educational opportunities are available, and it’s great to see you all here today eager to carry on this tradition.”

For NASA, the event also helps the organization reach out to businesses they otherwise may not have worked with, Ortega said. The organization has prime contractors it works with, such as aerospace engineering company Boeing, which attended the event to help small businesses understand how they could subcontract with them to help on large NASA projects.

The event also aimed to help businesses and educators understand the many NASA resources that could be used for their own benefit. Ortega gave the example of a business or a university that could use in its research earth science data that NASA has already obtained.

“(They could use) that raw data and do with it what they want to benefit themselves, whether it be for the benefit of more crop yields or whether it’s for the benefit of testing new software to control sensor technology,” he said. “Just making sure they are aware of those resources is what I’m pleased about.” 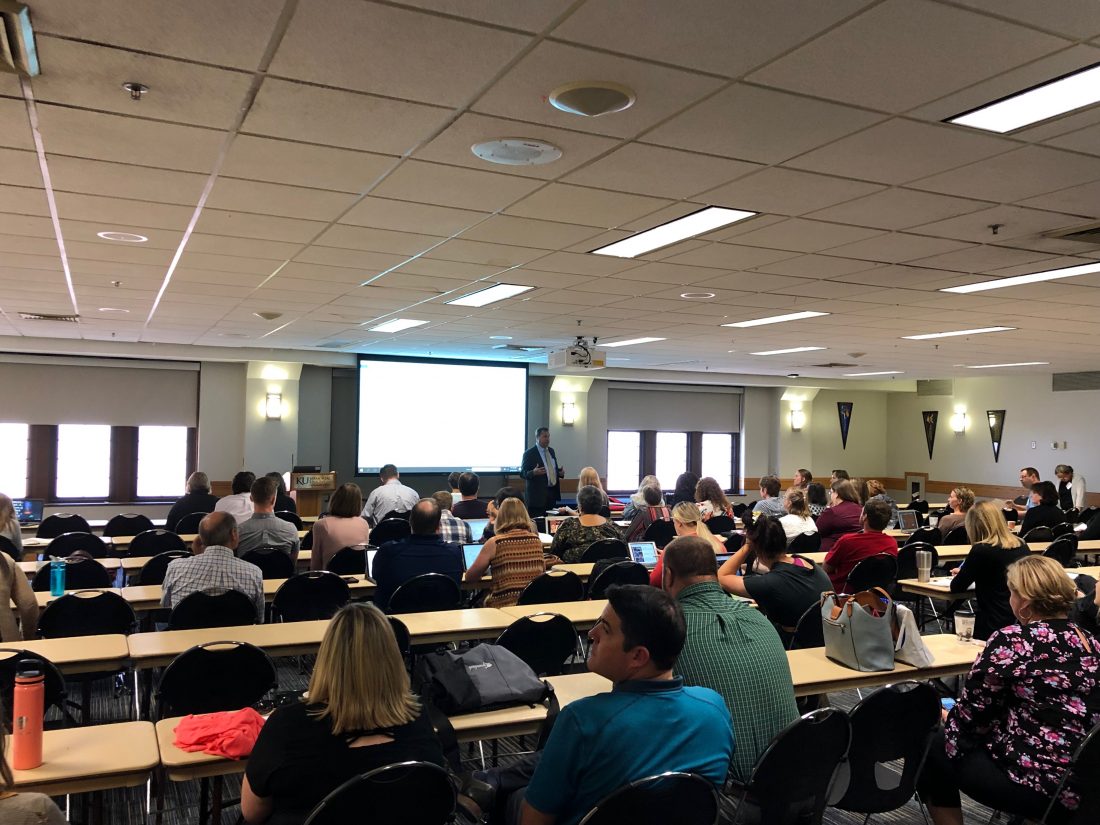 Kansas educators listen to Eloy Trevino, a representative of NASA Hunch, an education outreach organization for the space program, during a conference at the University of Kansas on Wednesday, Aug. 14, 2019.

While many of those resources could provide many big-picture ideas, some can help on a smaller scale, such as helping Lawrence students learn more in their classrooms. The event included information sessions on how teachers and college faculty may find and use NASA educational materials, propose and participate in research projects with NASA and participate in summer educational conferences and NASA fellowships.

Lisa Ball, an environmental science and biology teacher at Lawrence High School, said she attended the event to learn more about how NASA could help her educate her students through real-world activities. Those activities may help students find a new interest in space exploration or a field of study that is closely related, she said.

“They can learn about becoming engineers, designers and thinkers in general,” she said. “Beyond becoming an astronaut, (NASA) has really been talking about the support roles who are out there for anyone who wants to be involved.

“It’s really exciting to see all of the opportunities,” she added.