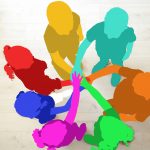 Superintendent Anthony Lewis said he was instrumental in bringing restorative practices to Kansas City (Mo.) Public Schools, where he was an assistant superintendent prior to coming to Lawrence in July.

In the KCMO district, Lewis said, the superintendent and cabinet went through a two-day training prior to rolling out restorative practices in schools. That’s something he wants to do in Lawrence, too, but funding is a big hurdle for that plan — training is “extremely expensive.”

“This is an initiative that we know works, that I’ve had experience with — but of course we have to have funds to train our staff on that,” Lewis said.

In the meantime, some pieces of restorative practices have already begun in district schools. Lewis said some benefits include helping students manage conflict, helping teachers create classrooms where students feel safe, and potentially curbing disparities in disciplinary punishments across different racial and ethnic groups as well as lessening discipline overall.

So, what does it look like? There’s no simple explanation, but within schools, restorative practices aim primarily to prevent, but also to repair, harm.

Ryan Fenderson, an instructor in the continuing education department of the International Institute for Restorative Practices, has helped schools and districts across the nation implement restorative practices. IIRP has done some large-scale work — such as Pittsburgh, Pa. — and much smaller-scale work, such as a school in Snoqualmie, Wash., a town near Seattle whose population doesn’t quite hit 15,000.

Lewis said that every morning in KCMO, elementary teachers hold “classroom circles” or “circle time.” Each student responds to a prompt that can be as simple as “How was your weekend?” or “What’s on your mind?”

That’s a practice that has already started in most, if not all, Lawrence elementary schools, he said, and this summer he plans to train building principals and make sure it’s happening in all elementary classrooms.

“Something like a classroom circle doesn’t cost us a dime,” Lewis said. He also noted that the high schools have been trying to ensure each student has an adult in the school with whom they can feel comfortable.

Fenderson said the classroom circle is one piece of the restorative practice continuum the IIRP teaches.

“You get to know each other better. You get to know maybe what people are going through, what they’re bringing to the table,” Fenderson said. “I really think that it makes classrooms a better place to learn when there’s a cohesive environment.”

Fenderson said IIRP holds to the idea that 80 percent of work in restorative practices is proactive — “when a kid is routinely breaking rules or norms, they’re telling you they’re not very attached to that community.”

The idea is that when there’s a strong community in place, people won’t want to hurt each other, and they’ll make it right when they do, Fenderson said.

“(The IIRP continuum is) based on a psychological framework called the psychology of affect, the idea that you just speak your emotions, speak to your feelings: ‘This behavior makes me feel this way,'” he said. “And again, if you’ve really strengthened that community, it’s going to bother them that they made you feel sad or made you feel upset.”

One piece of restorative practices that Lewis said he’s seen “work beautifully” is conflict resolution training for students. In KCMO, he saw elementary students who had received training sit down in a group to work through a conflict.

Lewis said he wants students in Lawrence to be trained with those skills, and he referenced a March 29 shooting at Holcom Park that seriously injured two Lawrence High School students.

How conflict is handled when it occurs is another piece of restorative practices.

As the Journal-World has reported, students of color in Lawrence schools have faced disparate discipline relative to their white counterparts. A November 2017 report shared with the Lawrence school board tracked data from 2013 through 2017. It showed that white students made up 67 percent of the student enrollment during the four-year study but never received more than 62.4 percent (2015) of the total out-of-school suspensions and accounted for just 53.2 percent of students disciplined in that manner in 2017.

The report also showed that every year from 2014 to 2017, the percentage of out-of-school suspensions given to black and multiracial students was greater than the percentage of black and multiracial students enrolled in the district. For example, black students, who made up 7 percent of the enrollment during the period, accounted for 12.7 percent of out-of-school suspensions in 2014, 14.3 percent in 2015, 10.1 percent in 2016 and 13.8 percent in 2017, the Journal-World reported.

“This is one of our PowerSchool woes that we’re getting adjusted to,” he said, referring to the district’s new software system, “so yeah, we’re beginning to pull that data and dig deep into that data.”

However, he said restorative practices could potentially help the district close some of those gaps and reduce discipline among all groups.

“Every child has the same amount of voice. The restorative process will play out the same for every kid,” Fenderson said. “The adults aren’t exempt from doing wrong in the building, and so this is certainly not something we just take as a measure and apply it to kids.”

Asked what he says to teachers who think students aren’t disciplined enough, Fenderson said that’s a difficult concern that he hears regularly.

“If I had all the ability to make all the policy and staffing discussions and changes, what I would love to see is that teacher come with the child to the office, that teacher participate with the child and the disciplinarian and really process out how they were harmed and how that relationship can be repaired,” he said.

Oftentimes under the standard method of sending kids to the office, Fenderson said that even once a student is behaving, the teacher is still upset because they haven’t had a chance to process and repair the relationship.

Lewis and Fenderson both said suspension, although sometimes necessary, does not serve students well.

After the suspension period, “the child has to come back, and the harm that they’ve done might still exist,” Fenderson said. “We may have punished them, but we didn’t do anything to make it right.”

Lewis said that lessening suspensions is “going to be part of a culture shift that we have to go through.”

Lewis is among more than 50 local education leaders who plan to attend a Wednesday summit, where several experts — Fenderson included — will speak about restorative practices in schools and in criminal justice. School board member Kelly Jones also confirmed that she’ll be in attendance.

Justice Matters, the local grassroots coalition of faith organizations that’s behind the event, has been advocating for a few years now in favor of restorative practices, both in Lawrence schools and in the local criminal justice system. The event has maxed out capacity for its venue, but recordings will be available on the group’s website, justicemattersinkansas.org.

Lewis said the district is also beginning to talk about creating advisory periods at the high schools.

“I tell people, ‘Yes, our teachers are responsible for teaching the content,'” Lewis said. “‘While that’s hugely important, a student that’s experienced an issue with another student or is going through any type of trauma could care less about solving your two-step equation or could care less about identifying parts of a cell,’ and so we have to make sure that we’re taking care of the student first.”

Lewis said he could see how restorative practices could fit into the district’s strategic plan, namely under the theme of social/emotional support and safety for students. The district is in the process of developing initiatives and action steps for the strategic plan.

Some teachers in Lawrence have had training through KIPCOR, the Kansas Institute for Peace and Conflict Resolution, but not to the scale Lewis would like to see. He said another reason he’s going to the summit is “to advocate for everyone that’s in attendance to help us with trying to secure some funds to make sure that we can get as many of our staff trained as possible.”