Board policy committee will review options to recoup costs 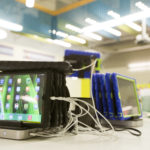 The Lawrence school board on Monday received a technology update that included statistics on the number of iPads, MacBooks and associated accessories students lost during the 2017-2018 school year.

Of the 2,500 iPads issued last year to middle school students, 26 were lost and another 42 weren’t checked back at the end-of-school due date, said Ellen Willets, district director of technology and learning, in her update to the board. In addition, 77 of the 3,200 MacBooks issued to high school students were lost.

The district charges students $40 to replace iPads and $75 to replace MacBooks, Willets said. But it will nonetheless cost the district $8,190 to replace the 26 lost iPads, and the bill could increase to $21,420 if all the unreturned iPads have disappeared. The cost to replace the 77 lost MacBooks is $51,000, she said.

The district can “ping” for the location of the missing iPads, but Willets said that wasn’t done, in part because she is confident the 42 iPads not returned last spring remain with students.

“I really do believe the majority of students have them,” she said. “They are still checked out in students’ names, and the students remain active in the system.”

Willets said the loss rate of iPads and MacBooks was about what was predicted before the iPads were introduced two years ago and MacBooks last year. What was unexpected was the high number of device power cords students have lost.

To address the problem, Willets said, the district will prepare a handbook for students and parents of how to care for iPads and MacBooks and of the importance of the power cords.

Additionally, the school board policy committee will be asked to consider a number of options that would allow the district to recoup more of the replacement cost of lost devices and accessories from students and families, Willets said. One option would require families to take out an insurance policy when the devices are issued. Other options would require upfront fees or replacement fees that increase the more a students gets a new computer or accessory. District leaders hope to have a policy in place before the beginning of the 2019-2020 school year.

The board also discussed providing iPads and MacBooks to student on a year-round basis. West Middle School Principal Brad Kempf and Free State High School Principal Myron Graber said that has been shown to improve student care of the devices because it increases a sense of ownership. It would also address the equity issues for students in families with no computers, they said.

Superintendent Anthony Lewis said the board would be presented with a year-round iPad and MacBook policy proposal in February.

Board members also discussed class sizes during the meeting.

Helping steer the board discussion in that direction were three mothers requesting an additional fifth-grade teacher at Sunset Hill Elementary School. Jennifer Thomas, whose son will be a Sunset Hill fifth-grader, said there would be 64 students in the two fifth-grade sections at the school.

Kathy Johnson, district finance director, provided the mothers with some reassurance, saying she was confident the district could revise a federal grant that would secure funds for an additional sixth-grade teacher at Sunset Hill and a kindergarten teacher at Broken Arrow Elementary School.

The district continued to monitor enrollment numbers and there was a possibility teachers might be reassigned from one elementary school to another with greater need, said Samrie Devin, district human resource director.

The district could also reallocate funding earmarked to other line items to pay for additional teachers, Johnson said.