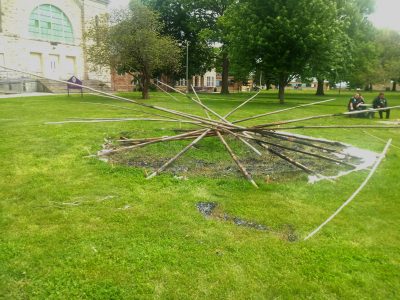 The Haskell Foundation has started a fundraising drive to replace the tipi that burnt on the Haskell Indian Nation University campus early Saturday morning.

The Haskell Foundation has started a fundraiser to replace the tipi destroyed by fire early Saturday morning on the Haskell Indian Nations University campus.

The cost to replace the tipi is estimated to be from $2,500 to $3,000, Hove told the Journal-World on Sunday. The foundation, a nonprofit with the mission of supporting the university, would like to replace the tipi as soon as possible. The tipi was erected to honor Haskell’s 2020 graduating seniors.

Hove said the cause of the fire is still unknown, but arson is a possibility.

“It’s quite possible,” he said. “I don’t think we know for sure yet, but that’s possible — maybe even quite likely. We’ll leave it to fire department experts to determine that.”

Hove said there has been a positive community response to the incident, no matter the cause of the fire.

“We’ve been very encouraged by the outpouring of support,” he said. “We’re really thrilled. It allows people to feel like they are doing something about this.”