Poet Antonio Sanchez-Day reads one of his works at an event at the Lawrence Public Library on Monday, March 9, 2020.

A few years have passed since Antonio Sanchez-Day was released from prison for the second time. But he can still smell the disinfectant and the smoke of the cellhouse; he can hear the squawk of the radios, the doors slamming shut and the murmurs of other inmates.

In prison, he could go anywhere he wanted beyond the walls of his cell by putting pen to paper. Now that he’s free, sometimes the opposite happens. It takes him back, and he feels a sting. He’s still grappling with institutionalization, he said.

“I’m not incarcerated, but, damn, I’m still trying to break free,” he read from one of his poems during a Diverse Dialogues event at the Lawrence Public Library Monday.

Sanchez-Day spoke about how he wound up in prison in the first place. His father died when he was just 12, and that sparked anger and conflict in his mind, he said. That, combined with the racism and isolation he experienced as one of the only Hispanic and Native American students in Lawrence schools, became a perfect storm in his later teen years.

He described what happened next in a second poem called “I Want to Belong,” from his book, “Taking on Life.” He found some other kids who were like him — black hair, brown skin, rejected and angry — and then he did belong. But the kids were part of a gang. After someone was almost killed one night in a gang fight, Sanchez-Day, then 18, went to prison for 10 years.

A few years after he was released, he reoffended and went back to prison for another few years, but he decided he wanted to turn his life around. A writing class at the Douglas County Jail, which he started before he was remanded to prison, helped him to do that.

Sanchez-Day said he sought permission from gang leaders to leave the lifestyle and embraced Native American spirituality, and it has given him peace. Mostly, “I let my pen bleed on the paper. That’s how I bleed it out,” he said. He now helps to teach the writing class and volunteers to help the men behind bars.

Author Mike Hartnett spoke about his memoir, “And I Cried Too: Confronting Evil in a Small Town.” The book tells the story of four murders in a small town in Illinois; three of the victims had testified or planned to testify against the killer for other crimes, one of them at Hartnett’s encouragement. 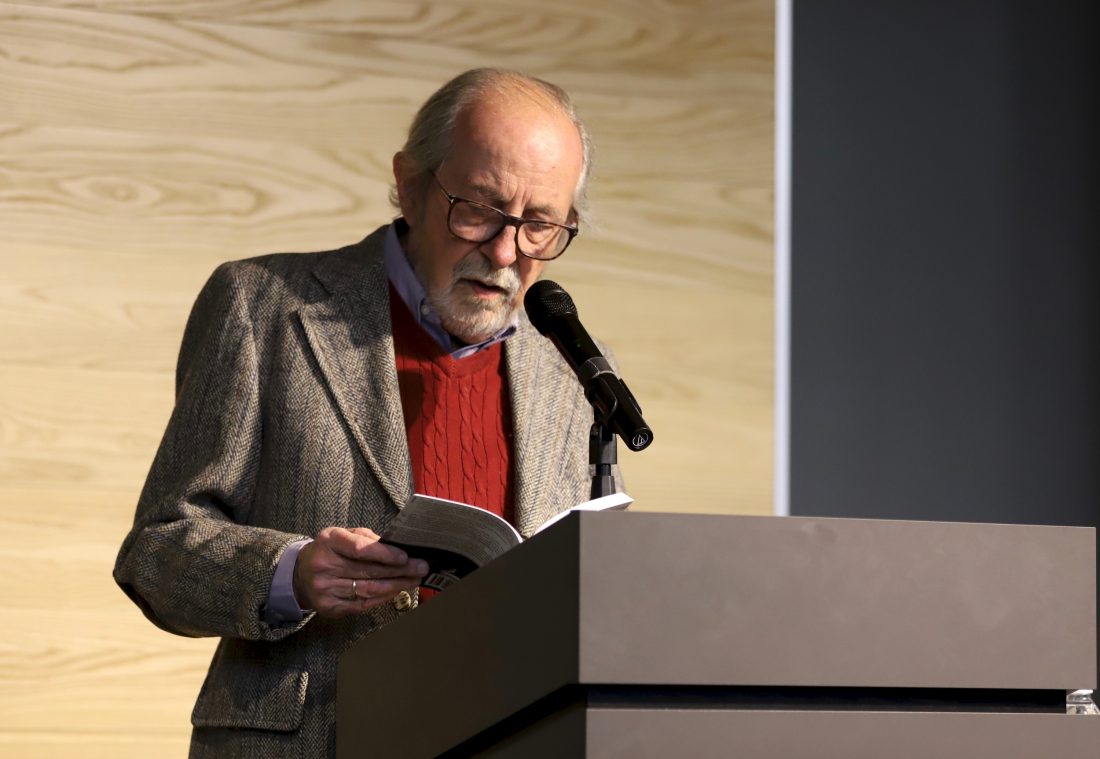 Author Mike Hartnett reads from his memoir, “And I Cried Too: Confronting Evil in a Small Town,” during an event at the Lawrence Public Library on Monday, March 9, 2020.

“Getting the story out on paper exorcised a lot of the guilt that I felt,” he said. “Not all — I’ll carry some to my grave, but a lot of it came out.”

Sanchez-Day agreed with that sentiment.

“It’s amazing how much you can stuff down inside and forget,” he said. “… And this writing, and the class, it helps me … tap into it. It helps me find the things that I forgot and I need to deal with — little things that hide in the corner of my mind.”

Sanchez-Day also said he wants to help the inmates understand that “we can achieve, we can overcome.” The cards are stacked against them, and they’re expected to reoffend, but they don’t have to.

“I do care about human beings and if they are serious about making a change in their life, I am all with them because I know what it takes,” he said.

Diverse Dialogues is a monthly series at the Lawrence Public Library in partnership with the Langston Hughes Center. Next month’s event, scheduled for 7 p.m. April 20, Lisa M. Corrigan will speak about her new book, “Black Feelings — Race and Affect in the Long Sixties.”