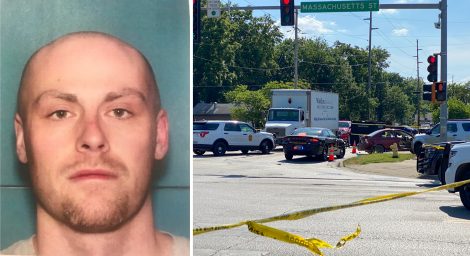 Pictured at left is Nicholas Hirsh, 31, of Nebraska. At right, law enforcement vehicles and police tape surround the scene of an officer-involved shooting at 19th and Massachusetts streets on Monday, June 15, 2020. The suspect, Hirsh, had been driving the red sedan seen here behind the fire hydrant.

The investigation is ongoing into law enforcement’s fatal shooting of a homicide suspect in Lawrence on June 15, according to the Johnson County Sheriff’s Office.

Nicholas Hirsh, 31, was linked to two homicides in Omaha, Neb., according to police there, and a warrant had been issued for his arrest. He was killed when a pursuit ended in Lawrence.

Johnson County Sheriff’s Office Deputy Claire Canaan said via email Thursday that she had no new information to release at this time; however, “We plan to present this case to the Douglas County District Attorney’s Office in the near future for their review.”

As the Journal-World has reported, Kansas Highway Patrol officers spotted Hirsh near Perry Lake and followed him into Lawrence, where officers from other agencies joined the pursuit. Hirsh crashed near the intersection at 19th and Massachusetts streets as a result of officers’ tactical vehicle intervention, and officers said he got out of the car wielding a gun at them.

Though it was not clear from the statements of law enforcement at the scene whether Hirsh had fired his gun, Omaha police said in a news release that Hirsh “shot at the officers and engaged them in a gun battle.” Two officers with KHP and one with the University of Kansas Office of Public Safety fired at Hirsh, killing him, the Journal-World previously reported.

The Journal-World reached out Thursday to two businesses at the intersection to inquire about whether they had any video surveillance footage of the incident. People who answered the businesses’ phones said they did not.