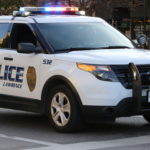 Lawrence police on Tuesday released the identity of a man found dead 13 days ago at Naismith Valley Park.

She said that at this time police did not suspect foul play in his death.

Officers had been dispatched the afternoon of June 10 to a report of a body found in the park, at 1400 W. 27th St., the Journal-World previously reported. Little additional information had been available to the Journal-World until Tuesday’s identification.