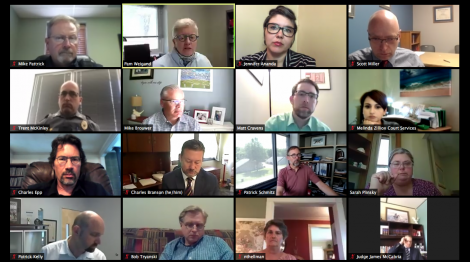 This screenshot shows members of the Douglas County Criminal Justice Coordinating Council during their meeting via Zoom on June 9, 2020.

Black inmates in Douglas County generally spend more time in the county jail than white inmates, and this problem is more pronounced in Douglas County than the national average, according to a new analysis presented to the local Criminal Justice Coordinating Council on Tuesday.

The incarceration rate is different from the number of people booked into the jail. Cravens’ analysis showed that the rate of black arrestees booked into the Douglas County Jail in 2019 was 3.1 times the rate of white arrestees. But the difference between black and white incarceration rates is larger than that, in part because black inmates spend more time in the Douglas County Jail on average, Cravens said.

Even though roughly one-third of the jail’s population comprises residents of counties other than Douglas, Cravens said he doesn’t reach a different conclusion when factoring in residency.

Mike Brouwer, Douglas County criminal justice coordinator, said having this statistical evidence to show what the council believed was true is “kind of another level. It validates what we all believe.”

“I think this gives us an opportunity to establish a baseline that as we implement training, that as we work through the recommendations of the law enforcement contact study, that we look at other national initiatives, we can now begin to have a baseline to compare ourselves to, and look at progress that we’re making,” Brouwer said.

Cravens did another analysis to examine the factor of race. He adjusted for conditions such as age, gender, number of charges at arrest, classification of felony or misdemeanor, specific offenses, court jurisdiction, case type and status in the courts. Some variables, such as criminal history and victim statements, were not factored into the analysis.

That model showed that for each day a white inmate spends in jail, a black inmate will spend 1.3 days, and a Native American inmate will spend 1.4 days, according to Cravens’ report. Hispanic and Asian people spend slightly less time, 0.9 days and 0.7 days, respectively.

Lawrence Mayor Jennifer Ananda sought more guidance from the rest of the CJCC members for next steps for the racial and ethnic disparities work group, but there didn’t seem to be much of a consensus.

Some members suggested further data collection that could glean additional insights, such as looking at how mental illness factors into the new analysis or trying to include criminal history data. However, it wasn’t entirely clear from the rest of the discussion what the next concrete steps would be.

Brouwer said the data in the report doesn’t prove what causes it, but that doesn’t mean the CJCC shouldn’t keep trying to address racial inequalities.