Lawrence woman charged with battery against 4-month-old; reportedly told police she’d been too intoxicated to babysit 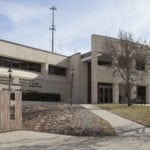 A Lawrence woman reportedly told police she regretted agreeing to babysit because she knew she was too intoxicated, and she didn’t remember what had happened to injure the infant in her care.

Medical records for the boy, 4 months old at the time, indicate that asphyxia could have caused his injuries, according to court documents.

The Journal-World requested and recently received the police affidavit supporting Crank’s arrest. Allegations in affidavits have not been proved in court, and all defendants in criminal cases should be presumed not guilty unless and until they are convicted.

The father told police he received a phone call from Crank about two hours later asking him to come back for the boy because he wouldn’t stop crying, so he “immediately” did so. The father said he noticed that the boy had a mark on his face, and when he inquired, Crank told him the boy had scratched himself while crying, according to the affidavit. He also noticed a bruise by the boy’s eye.

The father took the boy to the mother’s workplace to show her the injuries. They both also noticed a cut inside his lip, though he did not have any teeth yet, according to the affidavit.

“(The parents) stated they were concerned about the injuries because (the boy) was so young and not yet mobile and they did not believe he could cause the injuries to himself,” a Lawrence police detective wrote in the affidavit.

The parents took the boy to Lawrence Memorial Hospital, and he was later transferred to Children’s Mercy. The LMH nurse reportedly told police the boy had “petechial hemorrhaging,” which can occur if the child has been strangled; however, the boy had no marks on his neck to indicate that had occurred, the affidavit says.

In a report from Children’s Mercy, a health care provider wrote that “I am highly concerned these injuries were sustained by an asphyxia event of something being forcefully held over his mouth and nose. These injuries were not caused by a fall.”

The report stated that no follow-up was needed in the hospital’s Safety, Care & Nurturing, or SCAN, clinic, which specializes in identifying, preventing and treating child abuse, according to its website. Health care providers confirmed a diagnosis of child physical abuse, according to the affidavit.

The next day, police spoke with Crank. She reportedly told them she was the only one taking care of the boy, she did not know what caused his injuries and that she was intoxicated. The affidavit says Crank said it was possible she had dropped the boy or fell on top of him because she was so intoxicated.

The affidavit does not make clear a specific source of Crank’s alleged intoxication — there is no mention of drugs or alcohol.

Crank did not remember many details about the day but she knew she did not punch or throw the boy, she reportedly told police.

“Shannon said she felt bad for what she did to (the boy) but did not know what she did to cause the injuries,” the affidavit says. “Shannon stated she knew she was too intoxicated to be caring for any child and regretted agreeing to watch (the boy).”

The charge of aggravated battery in Crank’s case is a level-8, low-severity felony. In most cases the Journal-World covers, it is charged as a slightly more severe level-7 felony. State law dictates that aggravated endangerment of a child be charged as a level-9 felony.

In a the financial affidavit in her case, Crank lists one child as a dependent.

Crank was not arrested but went to the Douglas County Jail for processing on Nov. 21, according to online jail records. She was released minutes later on a $2,000 own-recognizance bond. The Douglas County Sheriff’s Office denied the Journal-World’s request for her booking photo.