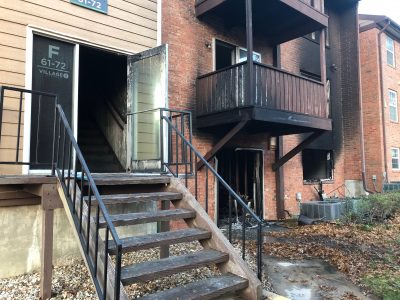 Lawrence-Douglas County Fire Medical investigators have determined that a candle caused a fire that displaced 11 residents of Village 1 Apartments.

Tom Fagan, LDCFM division chief of administration, told the Journal-World via email Thursday that an unattended open-flame candle started the fire, which caused an estimated $450,000 in property damage.

“Always be present when using open-flame candles, never leave them unattended,” he wrote. “When possible, use battery-lit candles.”

The fire was reported around 1:03 a.m. Friday, Jan. 3, at the complex in the 2400 block of Louisiana Street, the Journal-World reported. First responders evacuated residents and five cats. There were no serious injuries, but four people suffered minor injuries that were treated at the scene.

Twelve units became uninhabitable as a result of the fire.