After ordering him to stop talking at risk of incriminating himself, a judge sent a ballroom dance instructor back to the Douglas County Jail following his court appearance on Thursday.

Phillip M. Carney, 37, was arrested in the early-morning hours of Thursday, Jan. 2, and Saturday, Jan. 4, in connection with alleged burglaries of Cigar House Lawrence, the Journal-World has reported. After his first arrest, he was also served a warrant and charged in connection with an alleged Nov. 11, 2019, burglary at the same location.

Carney has been listed in jail records with an address in Bonner Springs, but he told the judge Thursday that he lives in Overland Park.

After he was charged with the first two cases, a judge set Carney’s bond at $10,000 and $5,000 own recognizance. He had been ordered not to return to the business, and he was released from the jail with GPS pretrial monitoring.

Over the weekend, another judge set his bond at $40,000 cash or surety, which he posted Monday evening after his first appearance in his third case.

Chief Assistant District Attorney Eve Kemple told the judge she’d heard from someone who wished to remain anonymous but who had an intimate knowledge of Carney. Kemple said she was told he is very violent, he has problems with drugs and alcohol, he has cases pending in Johnson County and he had a “long knife” when he was arrested Saturday.

And, at some point between last Thursday and Saturday, Carney’s GPS monitor was removed. Kemple said Carney cut it off. She asked the judge to set his bond at $100,000 in each of his first two cases.

Defense attorney Dakota Loomis has been appointed to represent Carney, but he was unable to attend Thursday’s hearings, and Shaye Downing filled in for him. Downing said she didn’t know where to even begin to address information from an anonymous source whom Carney could not confront, and she would object to the court considering those statements. She also objected to the steep increase in bond that Kemple was requesting.

Carney told Judge Amy Hanley that he was trying to adjust his GPS bracelet because it was hurting, a clip came undone and it came off on its own. He said he’d called pretrial release staff to report it, and they’d told him to bring the bracelet back Monday.

But, Carney explained, he has post-traumatic stress disorder and he was without his medication in between his arrests. He told the judge he had no intention of ending up back inside the business Saturday — and that was approximately when she cut him off.

Hanley had already told Carney she “would encourage” him not to discuss any of the events or the allegations against him at risk of incriminating himself in court, but he kept talking. After her second warning, he said if he’s locked up, he can’t pay child support.

Hanley revoked his bond in the first two cases for violating the conditions of removing the tracking bracelet and allegedly returning to the business. She said she had “grave concerns” for public safety. She set bond at $50,000 cash or surety in each of the first two cases, for $100,000 total. Should he make bond, she warned him, he is not to return to the business. He was taken into custody wearing a navy blue suit and a shocked expression on his face.

The Journal-World requested and, as of Thursday, had received two of the three police affidavits supporting Carney’s arrests. Allegations contained in affidavits have not been proved in court, and all defendants in criminal cases should be presumed not guilty unless and until they are convicted. 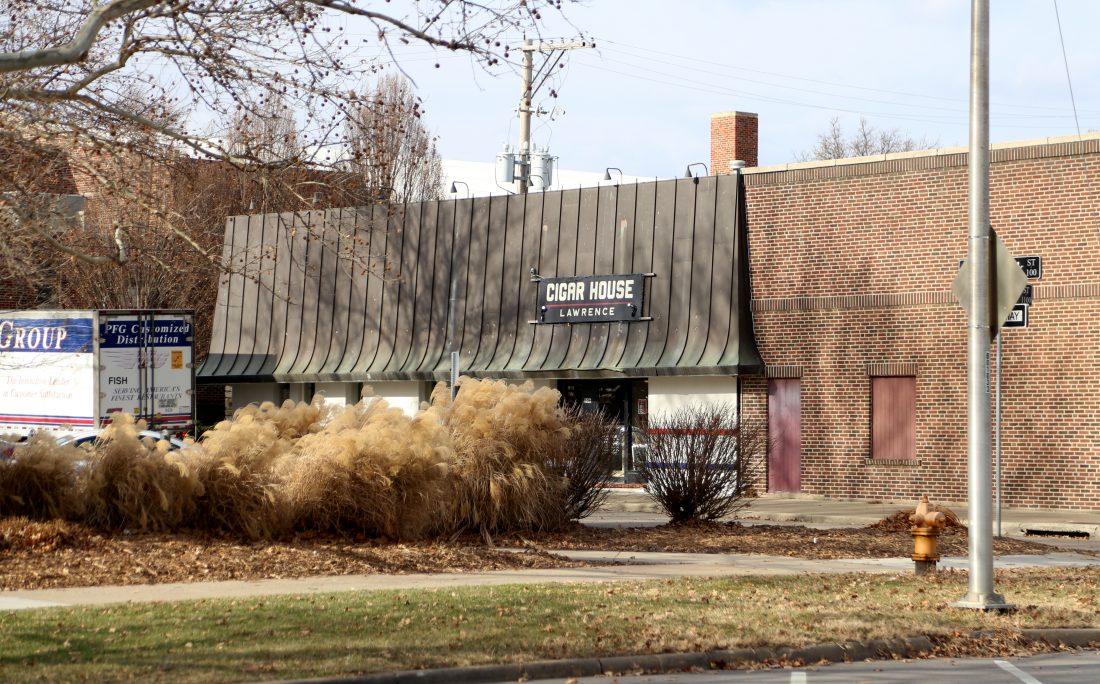 The redacted affidavits do shed a bit of light on Carney’s connection to the business. It’s not entirely clear from the documents when Carney was an employee there or when his employment came to an end.

But at some point after that, the owner of Cigar House Lawrence, 106 W. North Park St., had hired Carney to design a sign for the business, according to the documents; he did, and he brought it to the business owner on Nov. 4, 2019. The owner reportedly told police that he had told Carney he’d send him a check when he received an invoice. He gave Carney a cigar as a tip.

However, on Nov. 8, the owner reportedly received a text from Carney saying that he needed to be paid or “I will shut your ass down. Sick of your lack of gratitude,” the affidavit alleges.

An officer wrote in one affidavit that she believed this was the motive for the burglary.

The business owner told officers that the burglar stole more than $2,000 worth of cash and cigars, including one box valued at $300 that Carney had reportedly told him were his favorite.

Carney was not located on the scene on Nov. 11, but the business owner had surveillance video from that night, according to the affidavit. The officer writes that a tall, slender man in a trenchcoat, a collared button-up shirt and tie can be seen inside the business, carrying a briefcase. He reportedly walks out of the business with the cash register. Employees of the business identified the man as Carney, the affidavit says.

In the reported Jan. 2 burglary, the charging document alleges that Carney threatened an officer with a marbled stone ashtray in a sock; the officer believed he had used that to break one of the business’s windows. On Jan. 4, police say Carney struck an officer but no one suffered any injuries as a result.