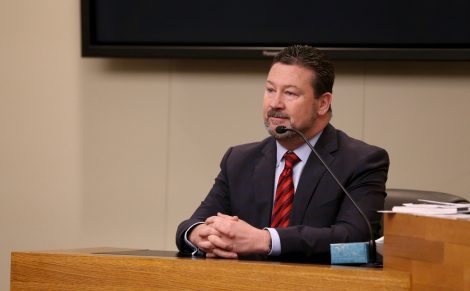 After his office was the subject of “controversy” in the fall, as he put it, Douglas County District Attorney Charles Branson has plans to change how sexual assault cases are investigated and prosecuted in this jurisdiction.

Branson discussed the changes with the Journal-World this week, about three months after he dismissed a case against a woman who was charged with filing a false report of rape. A Lawrence police detective had written in an affidavit supporting the woman’s arrest that he thought the woman became angry when she found out that an on-and-off boyfriend had been seeing another woman, and she wanted to pursue charges of rape against his friend to “punish” him.

Advocates for victims of sexual violence, including a group of undergraduate social work students at the University of Kansas, have said the case never should’ve been brought to begin with, and that it sent a harmful message to other survivors who want to report sexual assaults.

Branson announced the decision to dismiss the case in an Oct. 28, 2019, news release, in which he also said he would work with area law enforcement to update guidelines for the investigation and prosecution of sexually violent crimes.

One of the main concerns of the KU social work students was that those who were working on the alleged false report case demonstrated a “concerning lack of crucial knowledge” regarding trauma and sexual assault, as well as the behaviors that survivors may display after an assault, they wrote in a letter shared with the Journal-World.

Anne Divine, president of the KU Edwards BSW Student Group, told the Journal-World that the group wanted to see policy changes in the aftermath of that case and a “regrettable pattern” in other investigations.

Branson said that as part of the initial training and changes, in the past three months, all of the attorneys and victim/witness coordinators who work for his office have completed a five-hour training course on trauma-informed sexual assault investigations. He said detectives with the Lawrence Police Department are also undergoing that training.

Tom Tremblay, a retired police chief from Burlington, Vt., who specializes in trauma-informed response, investigation and prosecution training, will visit as a consultant in late April. Tremblay has worked with groups including the International Association of Chiefs of Police, National Center for Campus Public Safety, U.S. Department of Justice and Kansas Bureau of Investigation as a subject matter expert on domestic violence and sexual assault, according to his website and a news release from Branson’s office.

During his visit, Tremblay will lead an intensive two-day training session for a multidisciplinary group of more than 40 senior prosecutors, victim/witness coordinators, community service providers, detectives, investigators and their supervisors, Branson said.

Tremblay will also assist the DA’s office with drafting plans, policies and procedures to coordinate the responses of area law enforcement and attorneys in investigations and prosecutions in sexual assault cases, Branson said.

Branson said he planned to develop a continuing training program not only for the investigators “but for the first responders that are going to go out and make initial contact with survivors, so they have at least the basic tools to understand what’s going on, how to respond and how to make the handoff to the trained investigators.” He said “it is anticipated” that all area law enforcement will participate in annual in-service training.

Branson said he planned to facilitate and participate in all of the training.

After hearing some of the plans Wednesday, Divine said she thought the potential for change was “really wonderful.” Branson’s plan includes many of the points she and other students had pushed in letters sent to Lawrence city leaders, the DA’s office and local law enforcement. She lauded bringing in Tremblay as an outside consultant, and she said she thought it was promising that area law enforcement would undergo yearly training in trauma-informed practices.

Branson said one concern that came up early in discussions about these issues was that different agencies handled their investigations in different ways.

“That was a real concern to us because we didn’t want people to have a different experience based upon who investigated the case,” Branson said. “It also made a difference in how the case was investigated with what our office would do with it and how we would necessarily view it.”

He’s working with area law enforcement and service providers to create the Douglas County Sexual Assault and Trauma, or DSAT, Task Force, which aims to develop protocols to ensure that investigations are being done consistently from agency to agency.

Branson said he thinks there “certainly needs to be diverse representation” in such a task force, but those were the people who were assigned to him as the “point people” within each agency to develop investigation protocols and coordinate future training opportunities. He said that roughly half of the group that will participate in the intensive two-day training in April is female, and many of the investigators who will be working the cases are female.

In addition, Branson said he’s working to add more community partners to the task force, and there’s “most certainly” potential to add more point people within each agency.

As a low-level felony, a single charge of interference with law enforcement by falsely reporting a crime — as recent Douglas County cases were charged — is punishable by nearly two years in prison for someone with a serious criminal history. For a first-time offender, it would likely result in up to 18 months of probation.

Regarding false report cases, Branson said he believes that when law enforcement in Douglas County begins investigations it is “fairly open-minded.”

“When somebody brings to them an allegation that a crime has occurred, they try to get to the truth of the matter,” Branson said. “They try to decipher through everything that’s gone on, see what evidence is available and try and make a determination.”

He said of the alleged false report case that drew media attention and others that were recently dismissed, “None of those cases were done in a situation where officers just shot from the hip.”

He said law enforcement and prosecutors both take allegations of false reporting seriously, “as they should, because nobody wants to be accused of something that they did not do.” Prosecutors and a judge believed that there was probable cause for those cases to move forward.

But Branson said he wants to look at the best way to handle these types of cases, should another arise in the future.

“Certainly a false report case can be damaging, but is it in the public’s best interest to go forward with a case like that?” he said. “(Are) there other avenues that we can pursue to try to make sure that type of thing doesn’t happen again in the future, other than filing charges?”

He said he’s had the opportunity to talk with community providers and advocates, and he realizes the negative connotation of pursuing that type of case.

“We have to be very, very careful in those considerations and what messages we’re sending out to the public when we charge a case,” Branson said.

He also said that the theory of charging any case like that is to make a person realize that a great amount of resources go into investigation and prosecution of cases, and it means that some other case may not be investigated or prosecuted.

“So our interest isn’t in punishment necessarily as it is to educate,” he said.