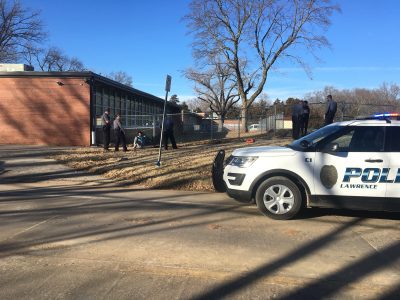 Police speak with two young men near the corner of East 15th Street and Haskell Avenue, Sunday afternoon, Feb. 2, 2020, after a report of a shooting in the area.

Two days after an incident in eastern Lawrence left a 14-year-old boy with an apparent gunshot wound, Lawrence police could not provide any additional information.

When asked about the incident on Tuesday, Lawrence Police Department spokesman Patrick Compton said he could not provide any new details. He said the case was still under investigation and no arrests had been made as of 5 p.m. Tuesday.

About 3:15 p.m. Sunday, officers responded to a report of a shooting at Edgewood Park, 1245 East 15th St., and found the boy with the wound. The boy’s injuries were not life-threatening, and he was taken to an area hospital.

Around 3:30 p.m., a Journal-World reporter saw several LPD and Douglas County Sheriff’s Office vehicles parked near East 15th Street and Haskell Avenue. Law enforcement officers spoke briefly with two youths and then took them away in their vehicles.

One officer on the scene told a bystander that the youths were being detained as part of the investigation but were not under arrest. Other officers were seen searching the grounds to the east. Police at the scene declined to answer questions.