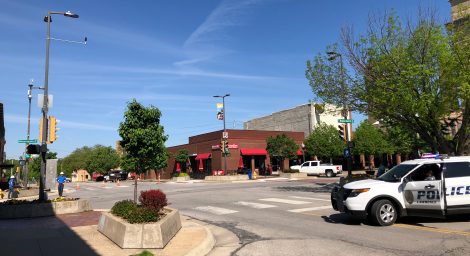 Lawrence police help block Eighth Street near Massachusetts Street after a gas leak was reported in the area Thursday, April 30, 2020.

Crews with Black Hills Energy responded quickly and shut down the gas, he said. Police and fire vehicles blocked off traffic on Massachusetts between Ninth and Seventh streets, as well as portions of nearby streets.

Firefighters evacuated buildings in the 700 block of Massachusetts Street to confirm safe air levels, Fagan said; crews also checked air levels on the west side of the 800 block.

The evacuation had ended by Thursday afternoon.

Approximately 35 customers were affected, and the cause was under investigation Thursday afternoon, James Williams, spokesman for Black Hills, said via email. Crews were also still working to restore all gas service, Fagan said.