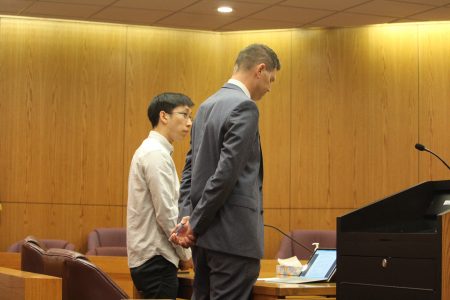 A judge on Friday sentenced a former University of Kansas volunteer assistant volleyball coach to probation for burglarizing players’ homes and stealing intimate items. He is also prohibited from coaching any sports.

Skyler Yee, 24, of Overland Park, was sentenced Friday to 24 months of probation for two felony counts of burglary of a dwelling. He has an underlying prison sentence of one year should his probation be revoked.

Yee must serve 60 days in the Douglas County Jail as a condition of his probation. He was taken into custody after the hearing.

In February, Yee was arrested and charged with 15 counts of burglary, property damage and theft occurring from December 2017 through January 2019, according to the complaint filed in Douglas County District Court. Four of the counts were felonies.

After linking Yee to break-ins at the homes of multiple KU women’s volleyball team members, Lawrence police searched his home, where undergarments of the athletes were found; they had been organized and labeled. Detectives said in an affidavit that they didn’t think Yee stole the items for financial gain but for “his own motivation.”

Until resigning in mid-January, Yee had been the KU women’s volleyball volunteer assistant coach since August 2016. Before that, he was team manager for the 2013, 2014 and 2015 seasons. He also coached girls from ages 11 to 18, prosecutor Amy McGowan said during the hearing.

The jury box and gallery were packed full of volleyball players, friends and family members.

In sentencing Yee, Douglas County District Court Chief Judge Peggy Kittel recapped several victim statements. Many of the players felt betrayed, targeted and helpless. They felt that a mentor had taken advantage of them. Many of them felt close to Yee and trusted him; they were like a family. Some of them had even turned to him in the aftermath of the burglaries.

McGowan read a written statement from one victim’s mother. She wrote that the family had known Yee for several years as he had coached her daughter from the time she was in middle school. The family was terrified when someone broke into their home and stole the victim’s intimate items, but they trusted Yee to walk her out to her car at night. She wrote that she would never forgive him, and that no words can describe the pain he caused.

Yee spoke briefly during the sentencing.

“I’m sorry for the position I’ve put everybody in,” he said. “… I’m not asking for forgiveness or sympathy because I don’t deserve it.”

Douglas County District Attorney Charles Branson, who stood in the corner of the packed courtroom through the sentencing, said in a news release that the women “showed incredible courage and strength during this process.”

“People take for granted the impact of property crime on victims,” Branson said. “The loss of a sense of security and safety is as real in a property crime as it is for a person crime. This was a personal violation for each and every one of them and I hope today’s sentencing brings them some relief.”

Yee will have to register as a sex offender for 15 years. He is not to do any work, volunteer or otherwise, involving young girls. He is not to have any contact with girls under age 18 besides his family members. He must continue his current sex offender treatment program, and he must pay $5,114 in restitution to victims and about $500 in court-related fees.