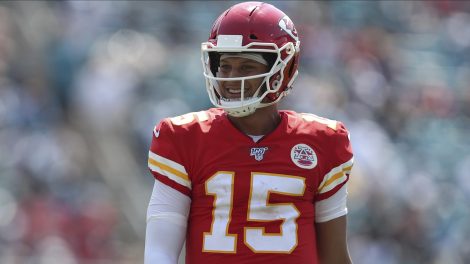 In this photo from Sept. 8, 2019, Kansas City Chiefs quarterback Patrick Mahomes (15) smiles on the field during a game against the Jacksonville Jaguars in Jacksonville, Fla. The Chiefs defeated the Jaguars 40-26.

Two suspects reportedly stole a lifesize cutout of the Kansas City Chiefs’ star quarterback, fled the scene and wound up in a car accident, according to information from Lawrence Police Department spokesman Patrick Compton.

Just after noon Monday, Lawrence police officers were handling a two-car injury accident at Ninth and Missouri streets when they received a call from dispatch about an alleged theft from a nearby McDonald’s, Compton said.

Employees of McDonald’s, 1309 W. Sixth St., and witnesses reported that a man and a woman had rushed into the store, grabbed the lifesize cutout of Patrick Mahomes II and sped away in their waiting car.

Compton said the description of that vehicle and the suspects matched one of the cars involved in the nearby wreck. Officers saw the cutout in the back seat and questioned the suspects about its presence.

The two were issued notices to appear for alleged theft and were cited in the accident, Compton said. Another person was treated for minor injuries at the scene.

The Mahomes cutout was returned to McDonald’s, Compton said.

As fans’ “Mahomes mania” has grown in Chiefs Kingdom, the QB — who shattered multiple league records and took NFL MVP honors in 2018 — is starring in commercials and leading a foundation called 15 and the Mahomies, and he has even had his own limited edition cereal, Mahomes Magic Crunch.