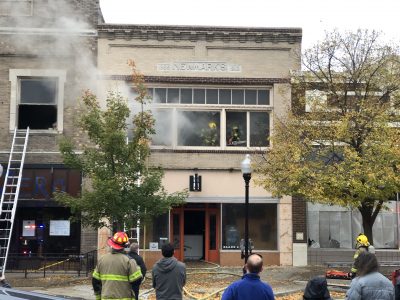 Firefighters work the scene of a fire Monday, Oct. 28, 2019, at the Blade and Timber shop at 809 Massachusetts St. Crews broke through doors and windows of adjacent buildings to ensure the fire hadn't spread.

Dalton Paley, owner of the property at 809 Massachusetts St. that is home to Blade and Timber, told the Journal-World Monday evening that he still didn’t have too many answers after a fire damaged much of the building.

Heavy smoke poured from the building for roughly two hours from the time the fire was reported around 8:30 a.m. Monday. The 800 block of Massachusetts Street was shut down for several hours as firefighters worked at the scene.

No one was injured during the course of the fire, which was under control as of 10:40 a.m., city spokesman Porter Arneill told the Journal-World at the scene.

Police and city crews blocked off the entire 800 block of Massachusetts Street, and part of the intersection of Eighth and Massachusetts streets was blocked for a time by fire hoses. Part of the road had begun to reopen as of 1 p.m.

When crews arrived at the scene Monday morning, smoke was seen escaping through the roof of the building, and the downstairs windows were obscured by a dark haze. Emergency crews were seen breaking open the door of the business around 8:50 a.m., and shortly after 9 a.m., firefighters began breaking open upper-story windows of the building and climbing in through a ladder. Firefighters also broke open doors to adjacent buildings.

Blade and Timber is an ax-throwing business that opened last year in Lawrence. The business also has two locations in Kansas City.

Paley told the Journal-World at the scene that no one was in the Blade and Timber shop Monday morning, except for some plumbers who discovered the fire and tried to put it out. He said the space above the ax-throwing business is currently vacant, as is the space atop neighboring restaurant Zen Zero to the south. The adjacent building to the north that formerly housed The Buckle clothing store is also empty.

Arneill said it didn’t appear that the fire had spread to nearby buildings. There was a great deal of smoke in the area, however. Crews were working with saws in the interior of the building and breaking out more upper-story windows as necessary as they investigated the fire.

Firefighters break out windows above Blade and Timber, 809 Massachusetts St., as they battled a fire Monday morning, Oct. 28, 2019.

Zen Zero owner Subarna Bhattachan told the Journal-World Monday evening that he wasn’t sure how long the restaurant would be closed. He said their insurance adjuster is coming tomorrow, and he hopes to have a better idea of the smoke damage then. He said he extends his deepest sympathies to the restaurant’s neighbors at Blade and Timber. Bhattachan said he appreciates the community’s support.

“We’re trying our best to open as soon as possible, but these things take time,” Bhattachan said.

Paley said firefighters told him they had identified the fire quickly after it started, so that was very fortunate. He said he went in the building with crews for about five minutes Monday afternoon, and it’s difficult to tell just how extensive the damage is because everything is off — no power, no gas, no water.

Paley said the crews had isolated the fire to the area of the first floor’s ceiling and the floor of the second floor. He said the basement seemed OK, but he didn’t get to see much in his brief walkthrough.

Firefighters break out windows above Blade and Timber, 809 Massachusetts St., as they battled a fire Monday morning, Oct. 28, 2019.

As of roughly 6:30 p.m. Monday, Paley said he still did not know the cause of the fire.

“It’s disconcerting for us, but we’re just rolling with the punches at this point,” Paley said. “… At this point, we just don’t know a ton.” 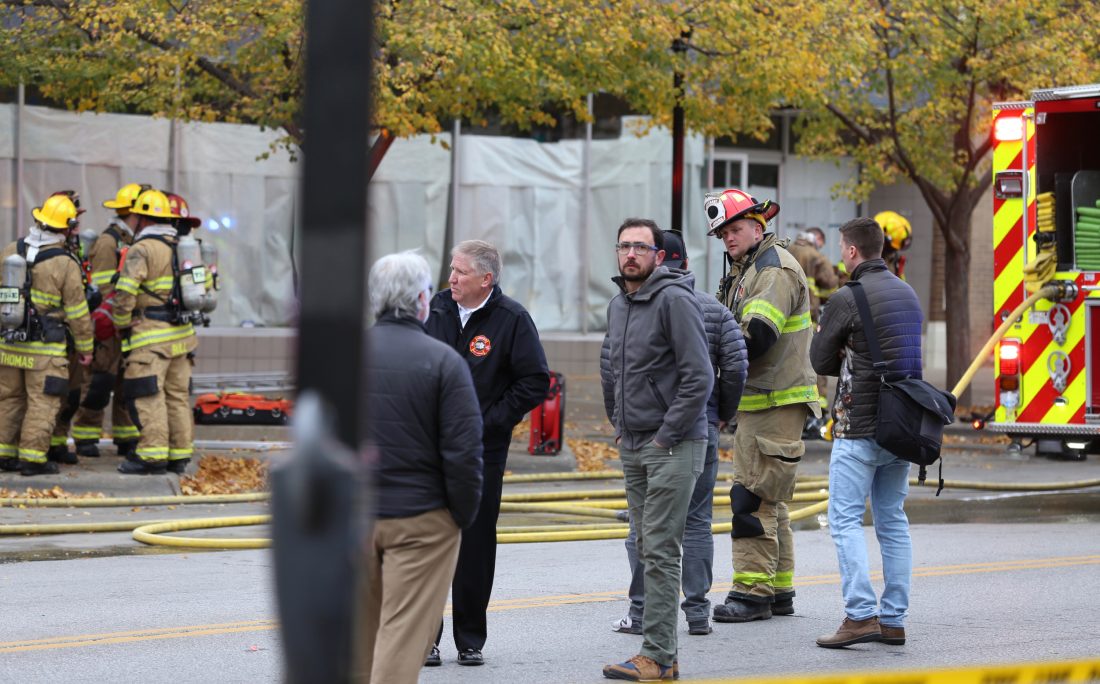 Standing at center and facing the camera, Lawrence-Douglas County Fire Medical Chief Sean Coffey, at left in the black jacket, and Dalton Paley, owner of the property at 809 Massachusetts St., wait for confirmation that a fire inside the building has been brought under control on Oct. 28, 2019.

He said he felt bad for the other businesses affected by the fire, and he hoped to have more answers soon.

Paley said the Lawrence-Douglas County Fire Medical first responders investigating the fire have been “rockstars about the whole thing.”

Arneill could not immediately be reached for further information Monday evening. 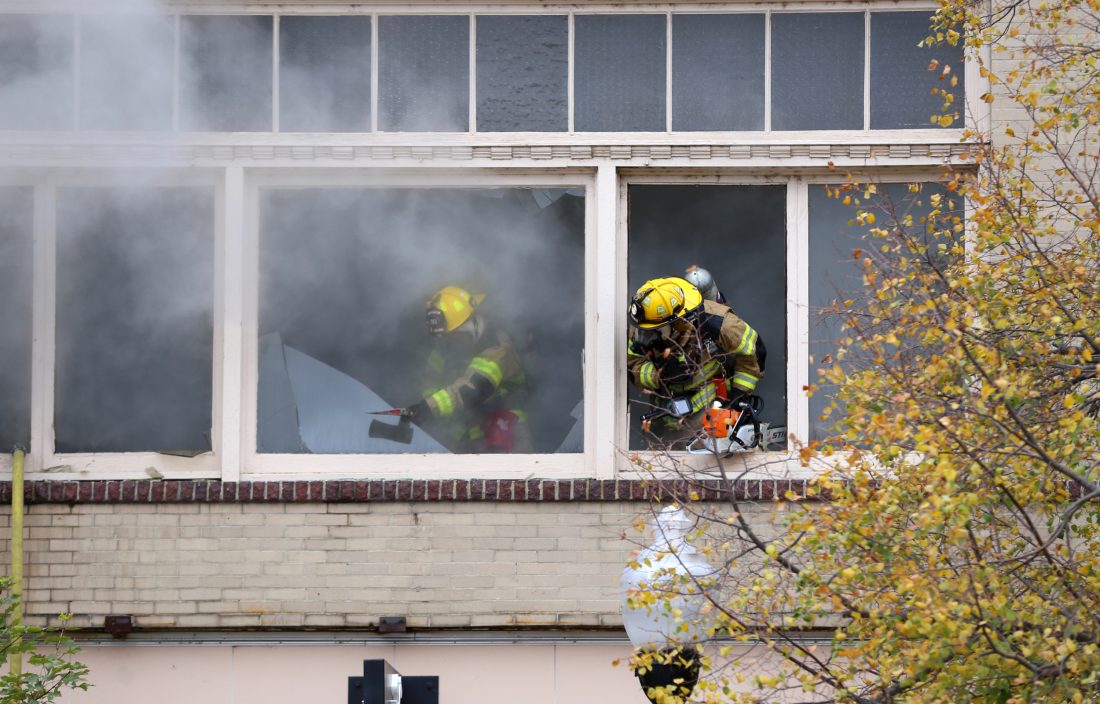 A Lawrence-Douglas County Fire Medical firefighter breaks out the remaining glass in a second-floor window at 809 Massachusetts St. as LDCFM works to put out a fire on Oct. 28, 2019. 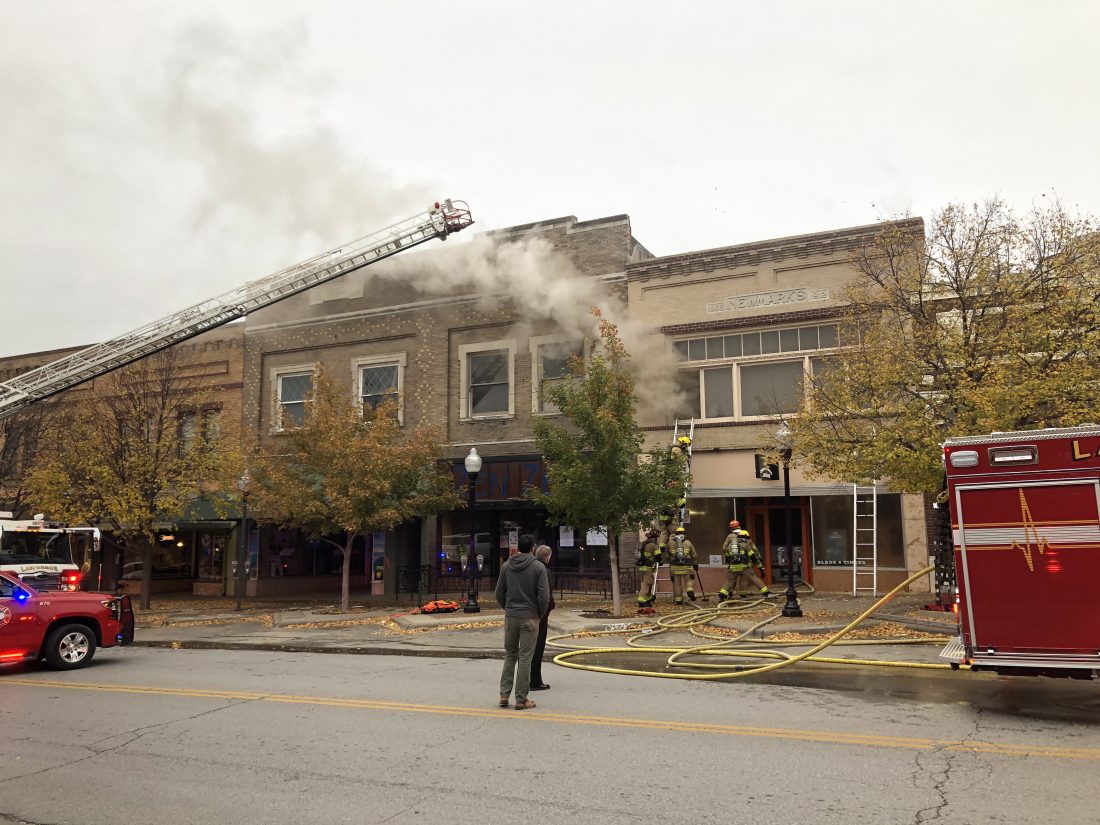 Smoke pours from the upper story of the Blade and Timber shop in downtown Lawrence on Monday, Oct. 28, 2019. 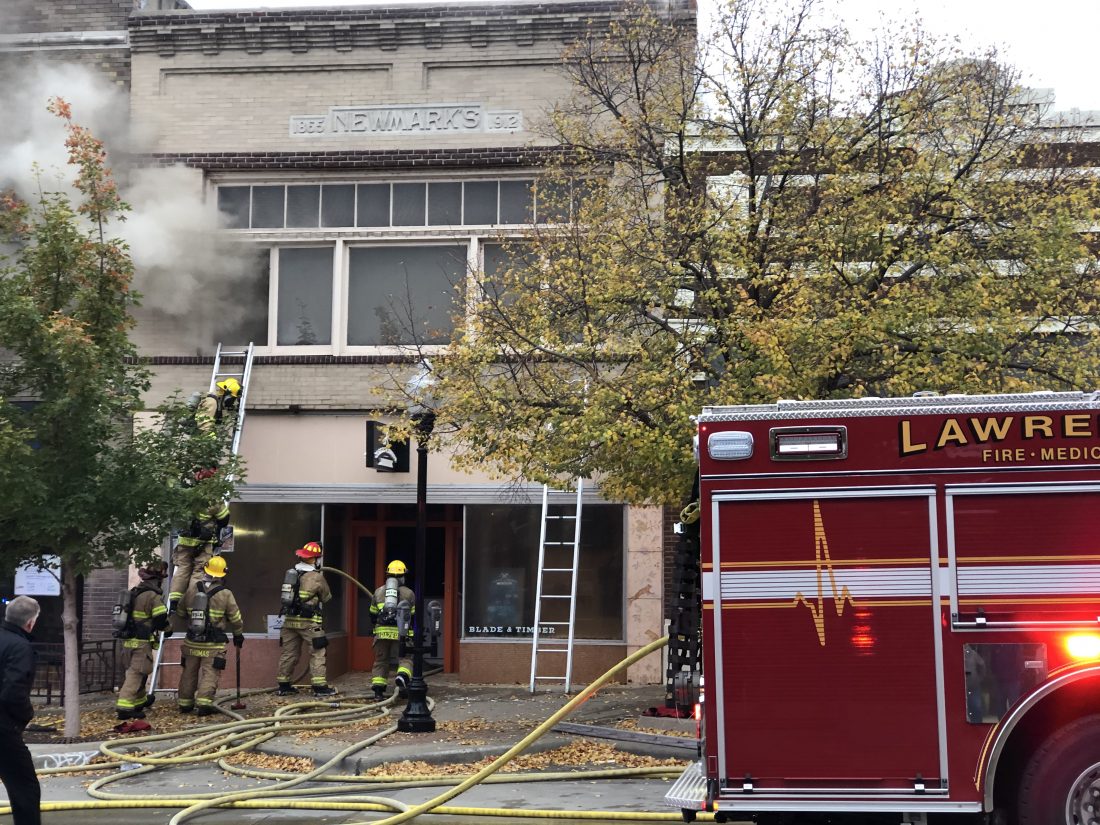 Crews break out an upper story window as they battle a fire at Blade and Timber Monday morning, Oct. 28, 2019, in downtown Lawrence. 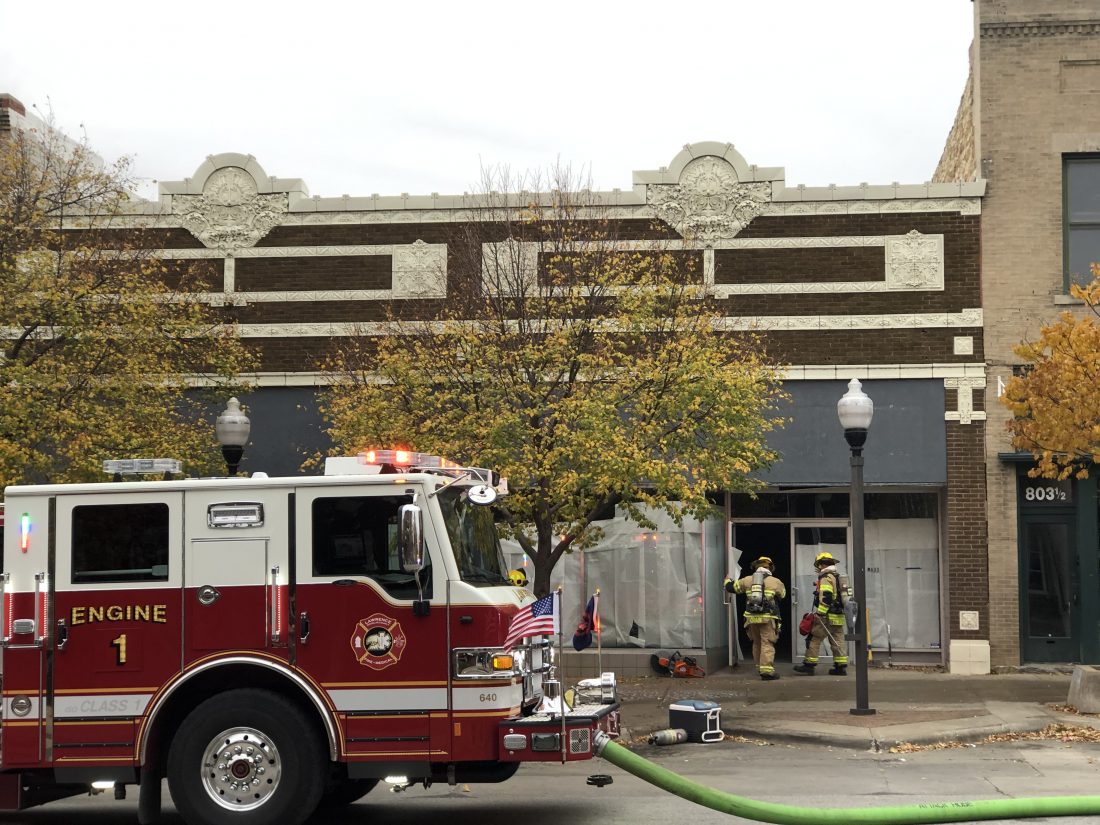 Firefighters use a saw to open the door of the former Buckle store in downtown Lawrence after the adjacent Blade and Timber shop at 809 Massachusetts caught fire on Monday, Oct. 28, 2019. 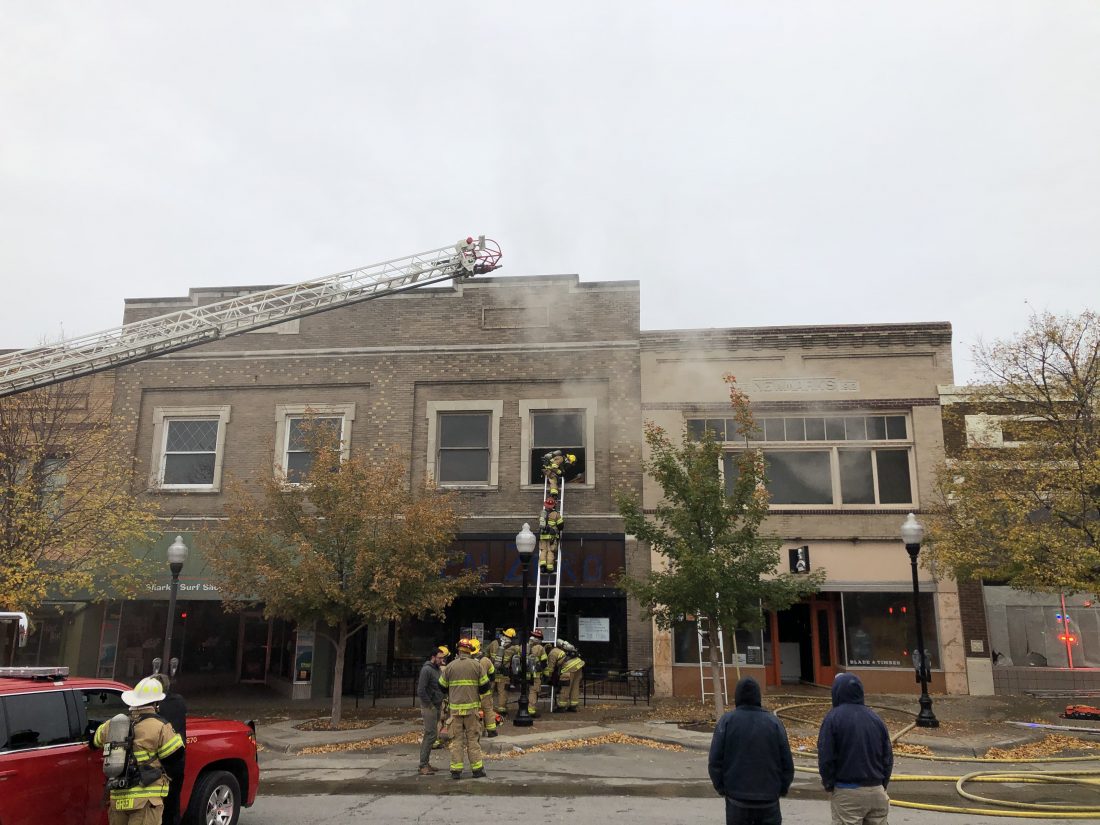 Emergency crews gain access to the space above Zen Zero restaurant in downtown Lawrence on Monday, Oct. 28, 2019, as they sought to extinguish a fire in the neighboring Blade and Timber shop at 809 Massachusetts St. 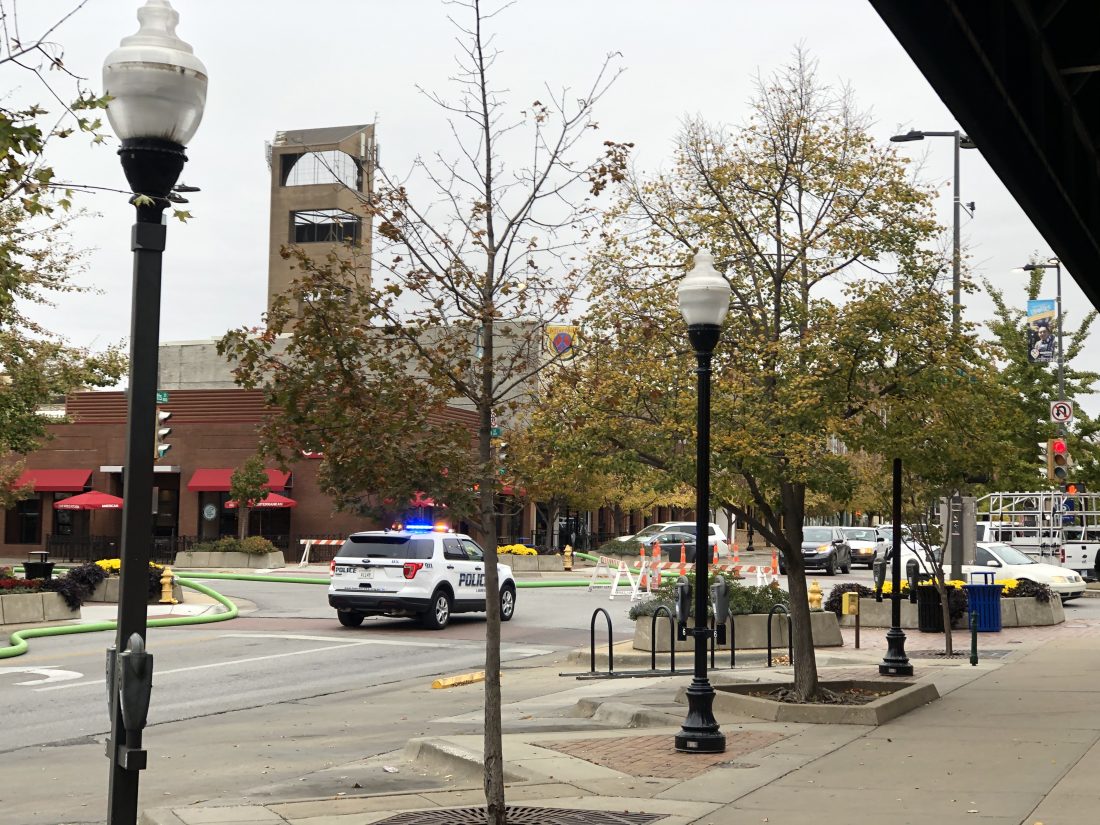 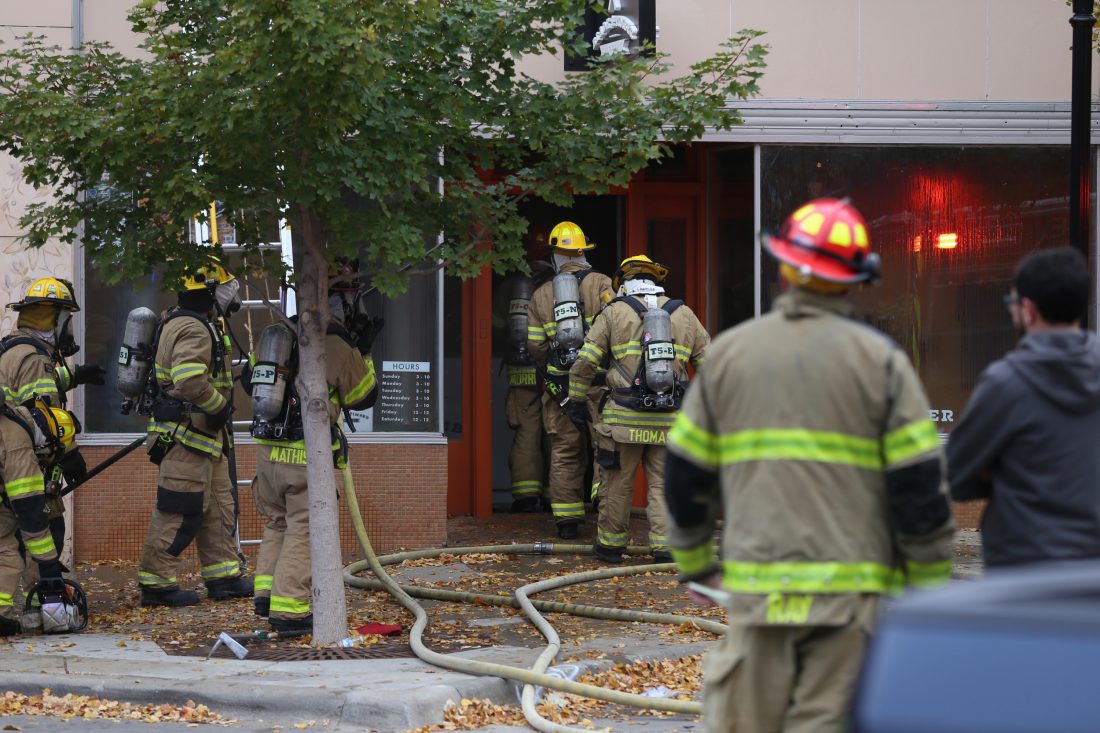 Lawrence-Douglas County Fire Medical firefighters head into the building at 809 Massachusetts St. as they work to put out a fire on Oct. 28, 2019.