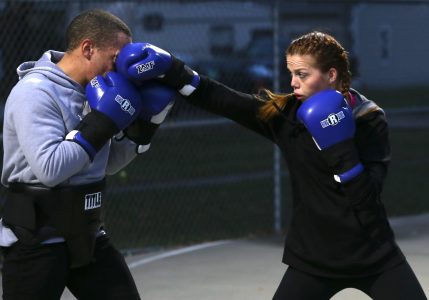 With months of boxing training under their belts, three area first responders continue to impress their coach.

“I call it an evolution,” trainer Daniel Barajas said Wednesday evening as the group cooled down. When they first started, “they looked nothing like this,” he said.

The matches pit department against department, but they’re all fighting for the same cause. The event raises money to provide immediate assistance to the families of Kansas City metro-area first responders who die in the line of duty.

However, the unifying purpose of supporting the Kansas City Crime Commission’s Surviving Spouse and Family Endowment Fund, or SAFE, does not mean the fights are fun and games.

Cooper, Clark and Davis have been going hard on the basketball court at Lawrence’s Veterans Park, 19th and Ohio streets, since July. They also have a Guns N Hoses veteran in their midst: Douglas County Sheriff’s Deputy Rich Qualls participated in the last couple of years’ events. He said with his assignments, he didn’t have time for it this year, but he’s stuck around for a lot of the training.

On Wednesday evening — a “light” training day, by their coach’s definition — the fighters wrapped their hands and wrists, warmed up with dynamic stretching and laps around the court and then proceeded to put their gloves on and spar in pairs. 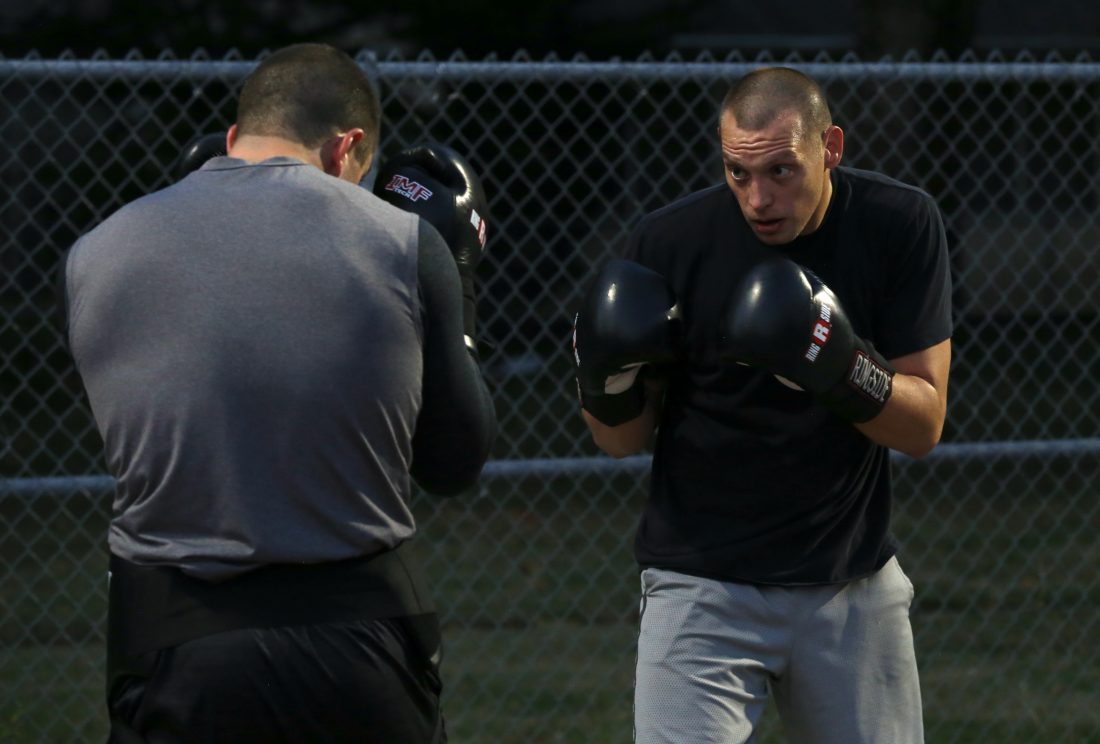 “You guys are making me dizzy with the carousels,” Barajas chided at one point: If you move in the same direction over and over again, you become predictable, the coach explained.

Next, they took turns punching and dodging Barajas’ mitts; then they did some shadowboxing. Finally, they did an agility drill as a team, batting a tennis ball back and forth to each other with their hands. If one of them missed, he or she had to do 10 burpees — a full-body exercise that combines a pushup, squat and leap. Even with that challenging move, the fighters floated like butterflies. 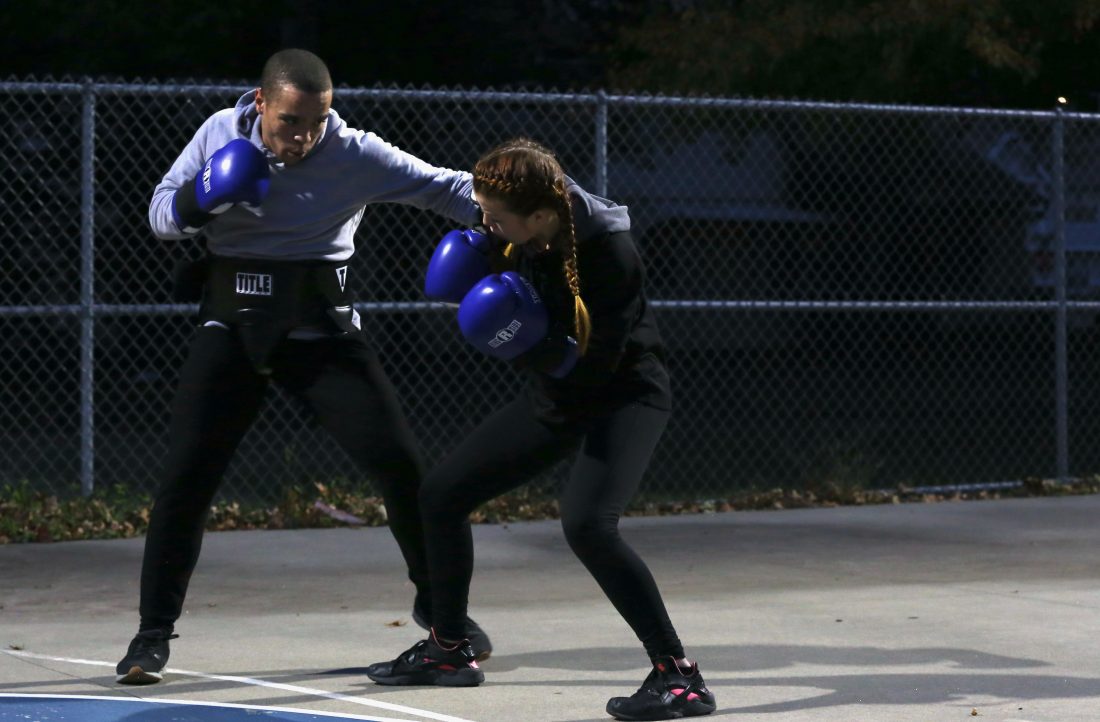 Corrections Officer Tyree Clark, left, and Deputy Charlie Cooper, both of the Douglas County Sheriff’s Office, train together on Wednesday, Oct. 23, 2019 at Veterans Park in Lawrence in preparation for the annual Guns N Hoses fundraiser.

The work hasn’t been confined to the physical exertion — though they have trained, rain or shine, for an hour and a half three or four times a week for months now.

“It just pushes you more, mentally and physically,” Davis, who has lost about 50 pounds over the course, said of the boxing training. “You just learn a different type of discipline, I think, with this, and the commitment of it.” 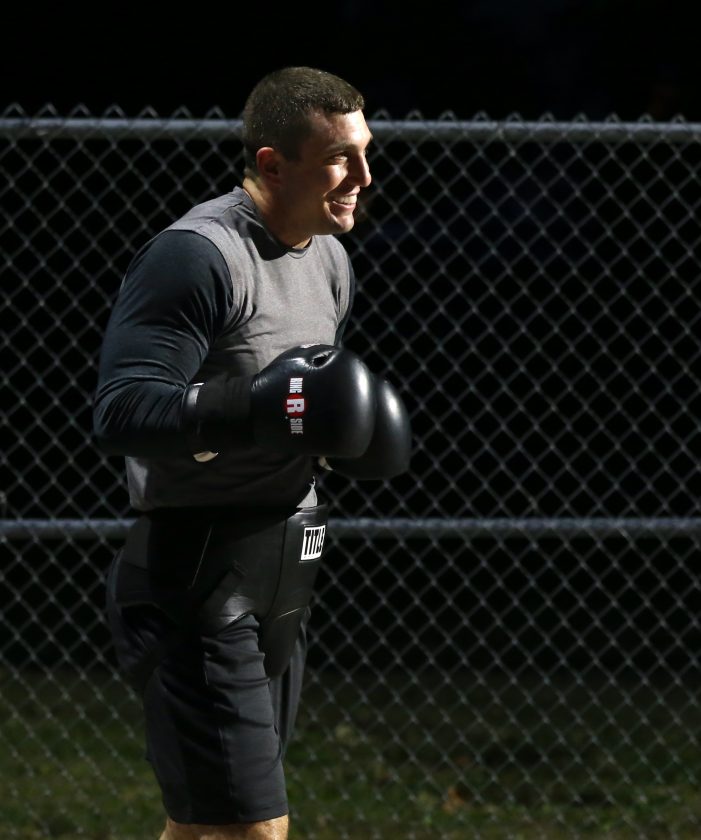 In addition, Qualls said participating takes big sacrifices of time away from family. There are medical exams and bloodwork — you can’t just train a couple of times a week and show up to fight, he said.

Plus, the fighters need to stick to a healthy diet.

“That’s half the struggle — eating good,” Cooper said, lamenting the pizza she’s missed. Pizza, nachos and Philly cheesesteaks will likely be featured on the post-fight menu for the three participants. They’ll also look forward to washing it down with some special-release October brews that they have yet to taste. 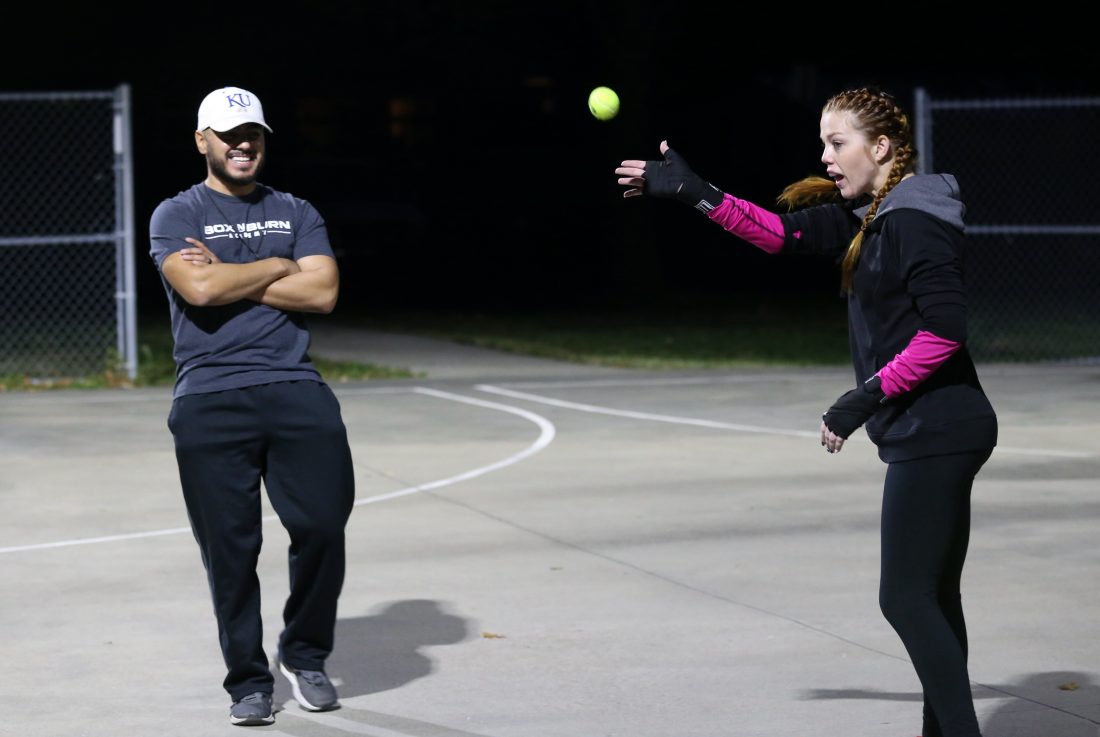 But Cooper said she can tell when she hasn’t been eating right. She feels different. And boxing is not a team sport where you can hang back and hope your teammates compensate when you have a rough day.

But the team mentality has helped keep the group on track.

“We’re not going out there on our own,” Davis said. “We’re going in together and leaving together.”

Barajas’ day job is with the city of Lawrence Solid Waste Division, but he’s been involved in boxing for 13 years, and coaching for most of that time. He trained five Douglas County Sheriff’s Office employees for the 2017 Guns N Hoses event, and a sixth trained with someone else. 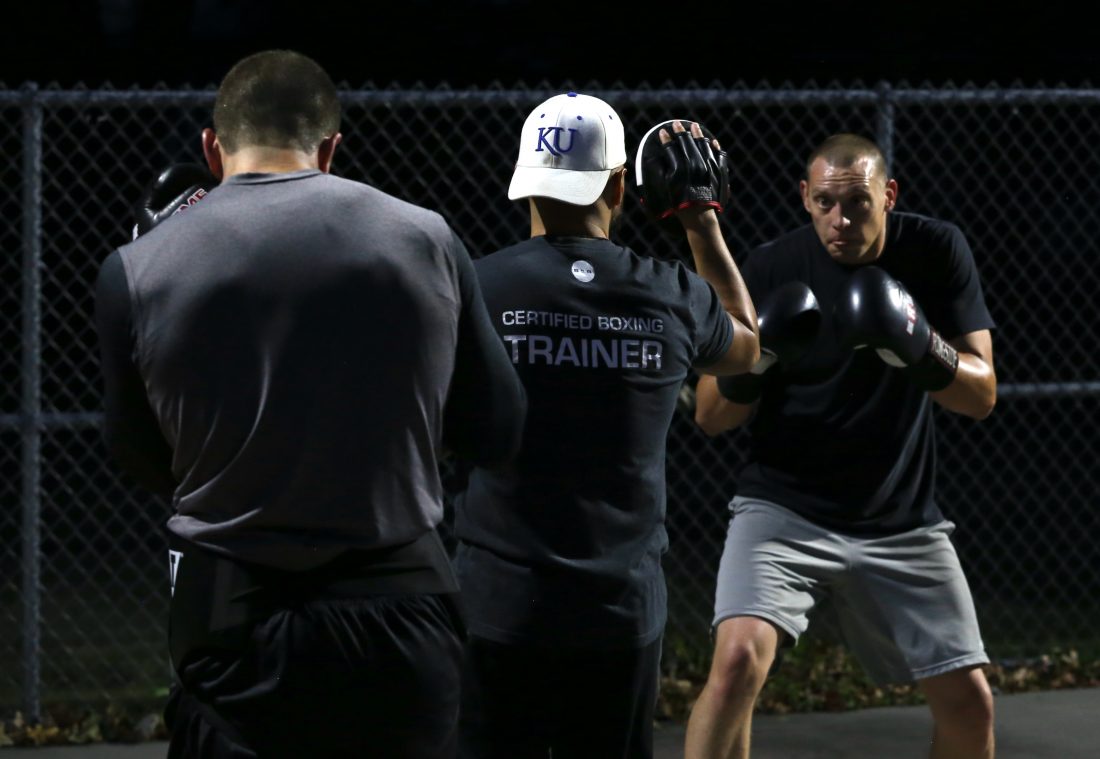 That year, Barajas had never done the event and he had no assistant coaches, he said, but he trains first responders and military members for free as his way of giving back.

“It was just me, all by myself,” Barajas recalled. “These guys approached me and said ‘Hey, we want to fight in Guns N Hoses.’ I said ‘Get some gloves.'”

“… In the end, it’s for something that really matters,” Barajas said of the fundraiser. 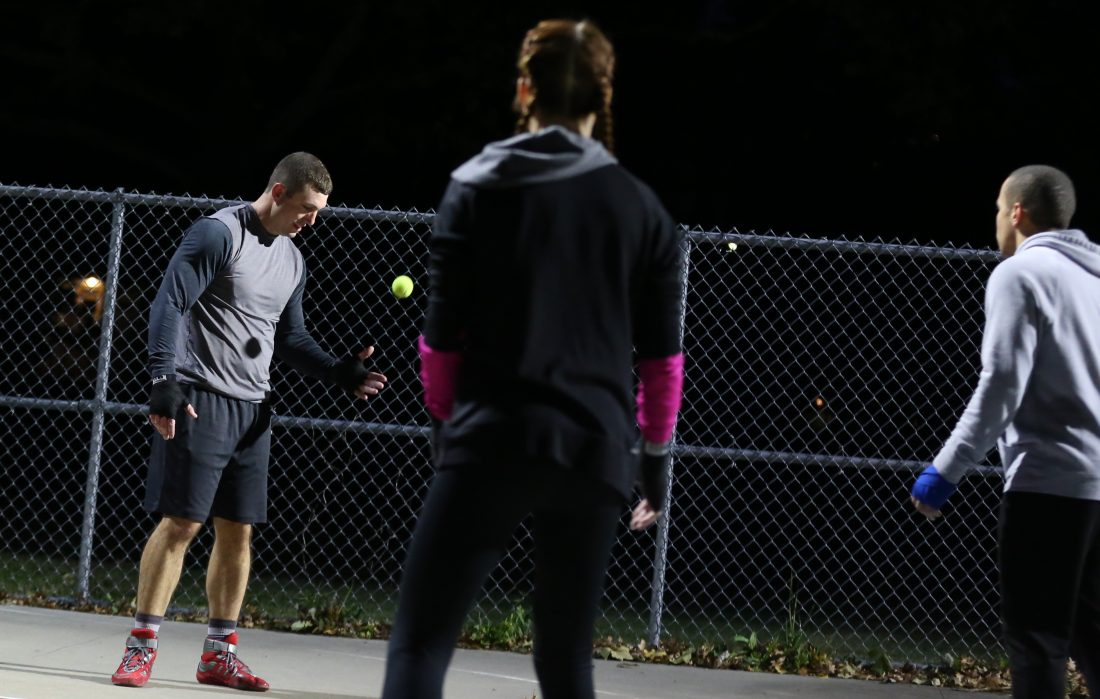 Though he can’t participate himself, Qualls helped get this year’s contenders on board.

“I wanted to make sure that we did our part to contribute to the Kansas City metro, which is our area of SAFE,” Qualls said.

He said other departments have lost a lot of officers — he could think of six off the top of his head.

“Those families made the ultimate sacrifice,” Qualls said. His colleagues who are participating this year are “doing their part to make sure that our brothers and our sisters next door are being taken care of.”

“This event is for them,” Davis agreed.

Robb Yagmin, who is coordinating public relations for the event, said SAFE has supported 29 families — 28 line-of-duty deaths, and the family of one officer who suffered career-ending injuries.

The foundation pays out a one-time, no-strings-attached sum of $25,000 to help support families for the time it takes for pensions and insurance funds to become available. Yagmin said in some cases, that can take eight to 10 months when families still have bills to pay. SAFE also provides Christmas presents for kids each year after their loved one’s death, he said.

There are 12 fights on the card. As of Thursday, Davis is scheduled for the third bout, against a Kansas City, Kan., police officer; Clark is facing a firefighter with the Kansas City, Kan. Fire Department in bout No. 4; and Cooper will face a Clay County, Mo., juvenile officer in the seventh bout.

General admission tickets are $25. If there are any tickets still available, they can be purchased at the door, but last year’s event was sold out. Proceeds from the event benefit families in 11 counties in the Kansas City metropolitan area. For more information or for tickets, visit kansascitygunsnhoses.com. 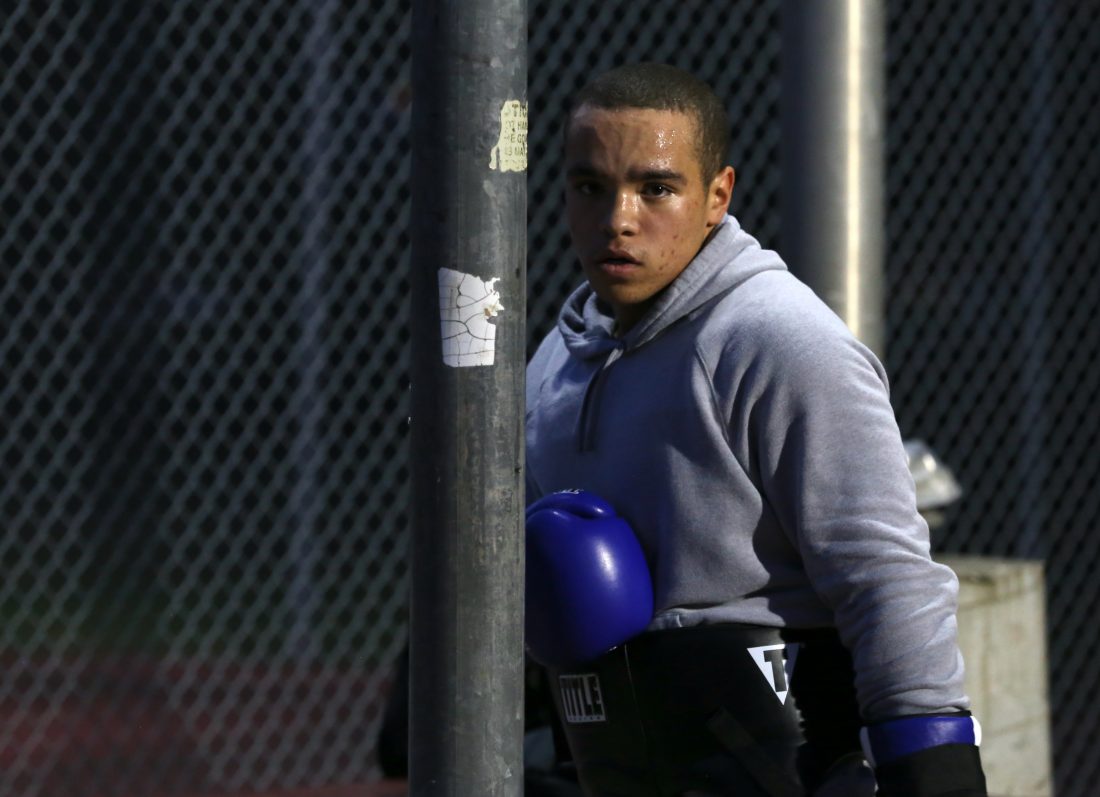 Corrections Officer Tyree Clark of the Douglas County Sheriff’s Office catches his breath next to a basketball post during training on Wednesday, Oct. 23, 2019 at Veterans Park in Lawrence in preparation for the annual Guns N Hoses fundraiser. 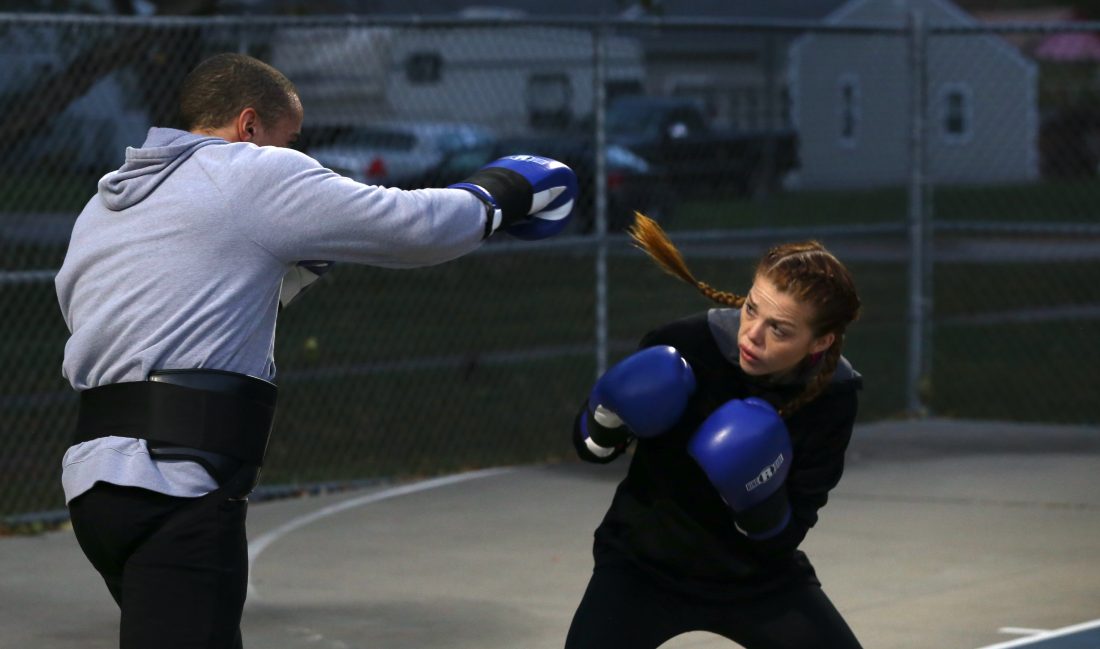 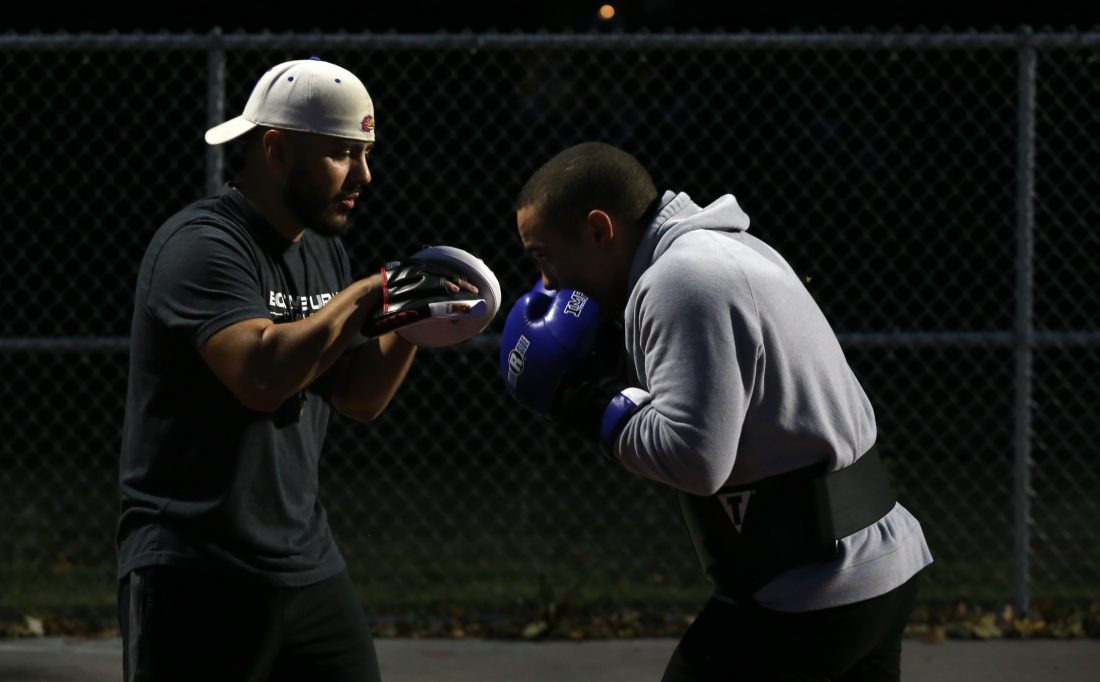 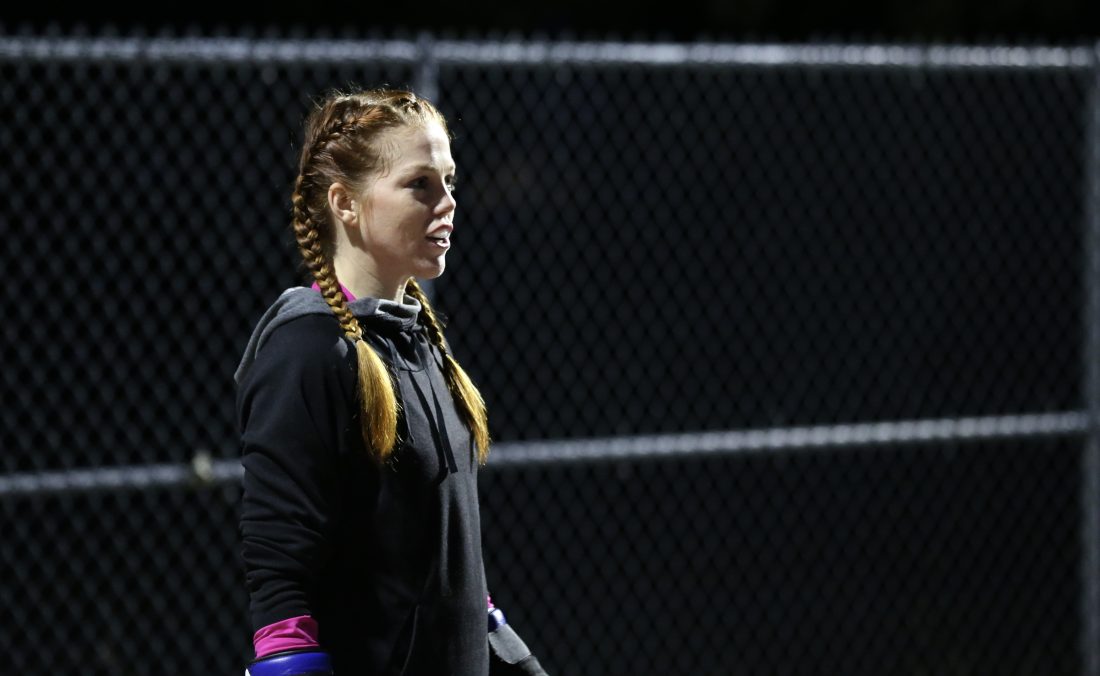