Douglas County prosecutor McGowan to retire; protesters had called for her firing 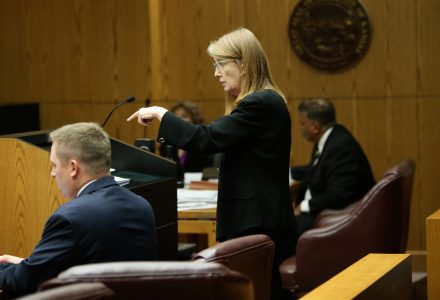 A top prosecutor in Douglas County will be retiring effective Nov. 1, according to the district attorney’s office.

Douglas County Chief Assistant District Attorney Amy McGowan has recently been the subject of a campaign in which protesters have called for her firing or resignation from the district attorney’s office.

Protesters led by Lawrence defense attorney Sarah Swain and Kansas City, Mo.-based private investigator and activist Latahra Smith gathered outside the courthouse on Sept. 16, the Journal-World reported. They were calling for McGowan to be removed from her position because of alleged prosecutorial misconduct.

In one case McGowan prosecuted in Jackson County, Mo., a man spent 23 years in prison for a 1996 double murder he did not commit. Ricky Kidd was exonerated on Sept. 13 after the Circuit Court of DeKalb County, Mo., ruled that McGowan failed to turn over exculpatory evidence in the case.

In Douglas County, McGowan once was removed from her cases and reassigned to other duties after the Kansas Supreme Court faulted her for trial errors, the Journal-World reported on Feb. 14, 2013. After the court’s ruling, District Attorney Charles Branson removed McGowan from her caseload of major felony sex crime cases, though she eventually returned to prosecuting those cases.

In response to emailed questions from the Journal-World, Cheryl Wright Kunard, assistant to the DA, said McGowan no longer maintained a case load and her prior case load was being transitioned to other attorneys.

Wright Kunard said it would not be appropriate for the office to respond to questions about McGowan’s age, how long she has been planning to retire this November and whether the decision was influenced at all by the recent protests. Wright Kunard said she would pass the Journal-World’s request on to McGowan, who did not immediately respond Wednesday afternoon.

In an email to the Journal-World Aug. 23, Gayle Larkin, counsel to the Kansas Board for Discipline of Attorneys, said McGowan had no record of discipline and her license was in good standing.

The soon-to-be-vacant chief assistant DA position will “eventually” be filled, Wright Kunard said, but right now the office has nothing to report.