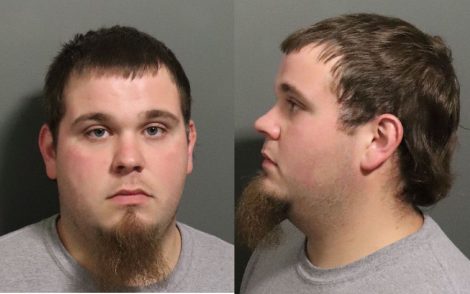 When a Gardner man reported to a Douglas County Sheriff’s Office deputy that his truck had been stolen, parts of the story didn’t add up, according to court documents.

The deputy later concluded that the man had falsely reported the truck stolen in an attempt to avoid drunken driving charges, he wrote.

Briley J. Bulva, 23, appeared on a summons and was charged June 27 in Douglas County District Court with two misdemeanors: interference with law enforcement – falsely reporting a crime intending to obstruct, and use or possession of drug paraphernalia, according to documents in his case.

The Journal-World requested and recently received the affidavit supporting Briley’s charges. Allegations in an affidavit have not been proved in court, and defendants in criminal cases should be presumed not guilty unless and until they are convicted.

Bulva called dispatch to report his truck stolen around 6:50 a.m. on March 30. A sheriff’s deputy and lieutenant responded to a home with a Baldwin City address, near the intersection of U.S. 59 and 56 highways south of Lawrence. Briley — clothes dirty with dried mud, and alcohol on his breath — reportedly told the officers he’d been up drinking Jack Daniels all night, and he’d passed out.

Around 6 a.m., Briley reportedly told officers, he had woken up to hear his 1986 Chevrolet Silverado pickup start and speed down the driveway. He said he ran outside and gave chase, but he fell down because he was still intoxicated. He didn’t know where his phone was, he said, so he could not call to report the theft. He woke up a friend and convinced him to get dressed and help him look for the truck, and they’d located it about a half-mile south of the home.

The truck wasn’t damaged but it had been backed into the east ditch and became high-centered, facing westbound into the roadway, according to the affidavit.

The deputy started investigating the incident as a stolen vehicle, he wrote in the affidavit, and the lieutenant allegedly found a Crown Royal bag holding a couple of pipes, a grinder and an empty plastic container, all bearing marijuana residue.

Briley reportedly told the officers it wasn’t his bag and he didn’t know what was in it. When the deputy told Briley he intended to send it to the Kansas Bureau of Investigation, he said the deputy had no right to search the truck; the deputy said he was processing it for evidence as a stolen truck.

When the deputy asked Briley whether his DNA would be on the contents of the Crown Royal bag, Briley reportedly stated “I don’t do marijuana. I used to …”

The deputy asked Briley how he knew that it was marijuana in the bag. Briley said he wanted to speak to his attorney, according to the affidavit.

A witness reportedly told the deputy he saw a person matching Briley’s description trying to remove the truck from the ditch starting around 5 a.m. Briley’s mother told the lieutenant that he had tried to call her nine times starting at 5:46 a.m., according to the affidavit.

The deputy believed that Briley had left in his truck, attempted to turn around in the roadway once he realized he’d left his phone at the home, got stuck, and then reported his truck as stolen in an attempt to avoid a charge of driving while intoxicated, according to the affidavit.

Briley is scheduled for a plea hearing on Wednesday, Oct. 23. His attorney, Philip Stein, of Shawnee, did not immediately respond to an email seeking comment for this article.