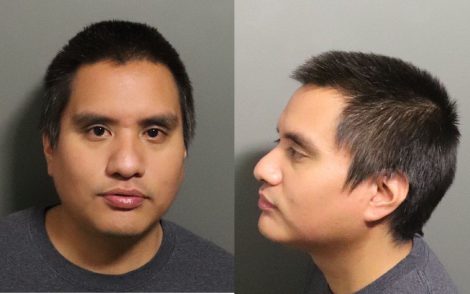 A 30-year-old Lawrence man reportedly attempted to stab his neighbor with a butter knife, according to police.

Officers responded to the 2500 block of West Sixth Street around 12:43 a.m. Wednesday for a disturbance with weapons call, Sgt. Amy Rhoads, public affairs officer for the Lawrence Police Department, told the Journal-World via email.

After the man allegedly tried to stab his neighbor, a physical altercation ensued, Rhoads said. Officers located and arrested the man on suspicion of aggravated battery shortly thereafter.

Terrence Tidzump was charged with attempted aggravated battery Wednesday afternoon in Douglas County District Court. The charging document in his case alleges that Tidzump “lunged at victim, trying to stab him then grabbed victim in a choke hold and tried to stab him in the neck,” but failed to do so. The charge is a midlevel-severity felony.

The judge set Tidzump’s bond at $10,000 cash or surety, and as of late Wednesday afternoon, he remained in custody at the Douglas County Jail. His next court appearance is scheduled for Oct. 28.