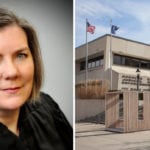 The Douglas County District Court’s chief judge plans to retire Dec. 31 after 19 years of service, according to a news release from the state Office of Judicial Administration.

Chief Judge Peggy Carr Kittel was appointed a district judge in April 2008 and then to her current role in 2016, according to the release. Before that, she had worked as a pro tem judge since 2001.

She said it has been a privilege to serve the state, and she appreciates the trust and support she has received from the residents of Douglas County.

“It is my hope those who appeared in my court had confidence their cases were heard fairly, impartially, respectfully, and in accordance with the law,” Kittel said in the release.

In this Journal-World file photo from April 9, 2008, Peggy Carr Kittel, center, is sworn in as a Douglas County District Court judge in the Division VI courtroom as, from left, her husband, Rick, and son, Jim, 13, watch. District Judge Robert Fairchild administered the oath.

An alumna of the University of Kansas School of Law and a lifelong Kansan, Kittel was assistant district attorney in Wyandotte County from 1983 to 1990 and was prosecutor for the city of Olathe in 1987, according to the release.

Kittel was an assistant district attorney in Douglas County from 1990 to 1996 and then practiced law privately until 2001, according to the release. She was then named a pro tem district magistrate judge for the 7th Judicial Circuit before being appointed a district judge in 2008.

Kittel said in the release that she would miss all of her colleagues and the court staff.

“It has been an extremely rewarding experience working with these dedicated employees, as well as the attorneys who have appeared before me,” Kittel said in the release. “I am especially grateful to my husband, my son, and all my family and friends for their support throughout my career.”

A nominating commission will interview nominees and forward the names of finalists to Gov. Laura Kelly, who will appoint a replacement. The new judge will be subject to a retention vote after one year and, if retained, the incumbent will serve a four-year term, according to the release.