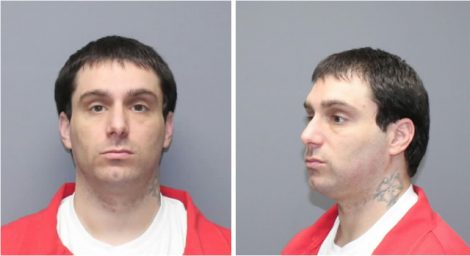 A Lawrence man’s prison sentence was cut by more than half Thursday, following the state appeals court’s reversal of his conviction and remand for a new trial.

John Timothy Baker, now 35, was accused of robbing a 23-year-old Lawrence man at gunpoint on Jan. 8, 2017, near West Campus Road and West Hills Terrace. The intersection is on the northwestern edge of the University of Kansas’ main campus in Lawrence.

The victim told police he was walking home from work when Baker and his co-defendant, a woman who is now 26, pulled up in a black pickup truck and asked for directions. Then Baker, the passenger, pulled out a shotgun, pointed it at the man and demanded his belongings, the victim said, according to court documents.

A jury convicted Baker of a single felony count of robbery on May 10, 2017. Since-retired Judge Paula Martin sentenced Baker to 130 months, or 10 years and 10 months, in prison, with two years of post-release supervision.

In an unpublished opinion filed March 22, the Kansas Court of Appeals agreed with Baker’s claim in his appeal that “the district court violated his constitutional right to a fair trial by excluding relevant evidence integral to his theory of defense.” The appeals court reversed his conviction and remanded the case for a new trial in Douglas County District Court.

An integral part of Baker’s defense was his own testimony that he was actually on KU’s campus looking for someone who might buy the methamphetamine he was trying to sell, the court opinion says. Baker said he recognized the man from a drug house he’d visited a week earlier.

Baker said during trial that he had offered the victim 3.5 grams of meth for $300, according to the court opinion. The man said he didn’t have that much money, but he’d leave his phone, apron and wallet with Baker as collateral while he went to pick up money from a friend nearby.

Baker said that instead of waiting, they drove off with the man’s possessions and that he later tossed the man’s cellphone and driver’s license out the window. He denied threatening the man.

“The essence of Baker’s defense was that he did not take (the man’s) belongings by force or threat, proof of which is required for the crime of robbery,” the opinion says.

However, the victim testified during trial that he did not use drugs or associate with people who did drugs.

The defense wanted to question a witness who claimed he also knew the victim and that the two had previously “conversed about trading drugs.” But the prosecutor objected, saying that it wasn’t relevant to the case. Baker’s attorney told the judge that it was “absolutely relevant” and “essential” to the defense, as it would have bolstered Baker’s statement about knowing the victim prior, according to the opinion.

The judge ultimately ruled it was “too far removed into speculative” and ordered the jury to disregard that witness’s testimony, according to the opinion.

The opinion states that the witness’s testimony “was certainly material in that it corroborated Baker’s theory of defense as to why he approached (the victim) in the first place.”

The opinion says the testimony was offered as “directly impeaching the credibility” of the victim’s statements that he did not use drugs or hang around people who did. The court concludes that the testimony was both material and probative and therefore relevant to the case.

Prosecutors wrote in a brief that “even if exclusion of this evidence by the district court was erroneous, the error was harmless,” according to the opinion, but the appeals court disagreed. Baker’s testimony and that of the victim relied on their credibility.

“(W)e are sufficiently troubled by the exclusion of (the other person’s) testimony that we cannot hold the error to be harmless,” the opinion says. “We conclude that the district court’s error substantially deprived Baker of his right to challenge the credibility of the State’s key witness, and thus it was a denial of his right to a fair trial.”

When Baker’s case came back to Douglas County, a judge appointed Dakota Loomis to represent Baker, and the case was settled with a plea agreement. Baker pleaded no contest in October to attempted robbery, aggravated assault, criminal threat and felony theft, all lower-severity felonies, court records show.

At his second sentencing Thursday, Baker declined to speak, though Loomis said Baker has been an active participant in his own defense and a “model client.”

Prosecutor Eve Kemple said she and Loomis agreed to recommend that Baker serve his sentences for each of the four charges consecutively for 58 months total, or four years and 10 months, in prison.

Douglas County District Court Judge Amy Hanley gave Baker that sentence Thursday. He will also have one year of post-release supervision. He is eligible for a 20% good time credit, and he has already served close to 34 months in custody.

Baker’s co-defendant was convicted of one count of aggravated robbery, then sentenced May 17, 2018, to three years of probation and drug treatment.