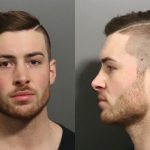 A 26-year-old man convicted in a hit-and-run accident that left multiple people injured on May 19, 2017, was sentenced Tuesday to 18 months of probation.

Andrew A. Walden, formerly of Iola, admitted to police that he rear-ended a broken-down Dodge Neon that several people were trying to push in the lanes of the 900 block of West 23rd Street, then kept on driving, according to a police affidavit in the case.

On Sept. 26, Walden pleaded no contest to leaving the scene of an accident involving great bodily harm and two counts of aggravated battery, the Journal-World reported.

One of the four victims injured in the accident addressed the court at Walden’s sentencing. She said she thought he should see prison time.

“He left us laying on the road,” she told the judge through tears Tuesday morning. “I could’ve died; I wouldn’t have been able to have my baby.”

She said she lives in pain, both physical and emotional, every day, and that Walden has never said he’s sorry.

Douglas County District Court Judge Kay Huff said that as a condition of his probation, Walden must serve 60 days in the Douglas County Jail.

Huff said it was true that she had never heard Walden apologize. Walden’s retained defense attorney, James Campbell, told Huff that Walden had not apologized under the advice of counsel, because of a pending civil suit regarding the same accident.

Walden elected not to speak during his sentencing, but Campbell said his client has expressed great emotional distress and that he understands he made a horrible mistake. He also said that because of the severity of the offenses, if Walden should ever re-offend he would face the maximum punishment allowed under Kansas sentencing guidelines.

Three felony convictions would also make it difficult for Walden to find employment, Campbell said, and he requested that Huff reconsider the 60 days of jail time. Huff granted Walden work release for that time period so that he can keep his job, and he has until Thursday evening to report to the jail.

If Walden’s probation is revoked, he could face an underlying prison sentence of 12 months, plus 12 months of post-release supervision.

The pending civil lawsuit against Walden seeks damages in excess of $75,000 for “economic losses, grievous physical injury, disfigurement, past and future medical bills, lost wages, lost earning capacity, past and future mental anguish and medically significant emotional distress,” the Journal-World has reported. The next court date for the civil suit is a motions hearing scheduled for Dec. 23, online court records indicate.