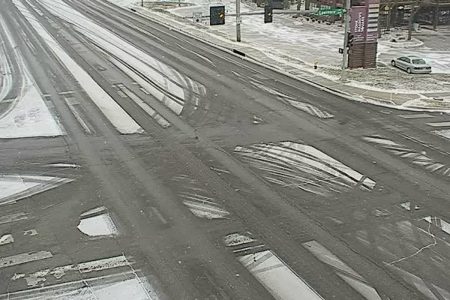 The intersection of Lawrence Avenue and Sixth Street is seen from a city traffic camera around 11 a.m. Monday, Nov. 11, 2019.

Around 7:20 a.m., Douglas County Sheriff’s Office deputies responded to a single-vehicle crash in the 400 block of U.S. Highway 40, Public Information Officer Jenn Hethcoat said via email. The area is about 4.5 miles west of Interstate 70’s interchange with Kansas Highway 10.

Over the rest of the day, deputies worked an additional three accidents, Hethcoat said. One of them resulted in minor injuries, but the patient declined medical transport, she said.

From roughly 2 a.m. until 10 a.m. Monday, Lawrence police had worked one accident, department spokesperson Patrick Compton said via email. It occurred around 9:30 a.m.; there were no injuries, and one driver was issued a citation for speeding, he said.

After that, however, Compton said LPD worked 12 noninjury accidents, plus one accident in which a patient suffered minor injuries just after 4 p.m. at West 13th and Tennessee streets.

“Deputies on the road report that road conditions are deteriorating rather quickly with some patches of ice and the wind causing the snow to drift and decrease visibility,” Hethcoat said. “We would encourage anyone out driving to slow down, allowing additional time to get to their destination, to wear seat belts, and to turn their headlights on.”

As of Monday afternoon, the rest of the week was expected to be warmer and mostly sunny, with temperatures reaching back into the 50s on Friday.