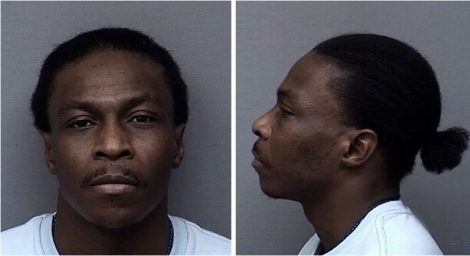 Lawrence police made an arrest Saturday after a caller reported a masked man walking around with a long gun, according to court documents.

The police affidavit supporting Robinson’s arrest provides more detail surrounding the charges against him. Allegations in affidavits have not been proved in court, and defendants in criminal cases should be presumed not guilty unless and until they are convicted.

Just after 6 p.m. Saturday, Nov. 2, officers were dispatched to a report of an intoxicated and armed person in a vehicle near Sixth Street and Kasold Drive. However, they did not locate the vehicle.

Then at 8:43 p.m., a caller told dispatch that a man wearing all black clothing and a mask was walking around with a long gun in the apartment complex at 2500 W. Sixth St. When officers arrived at the scene, one of them spotted Robinson’s vehicle leaving the area on Graystone Drive.

Police stopped Robinson in the parking lot of Dillons, 3000 W. Sixth St., and detained him in handcuffs. The affidavit says there were two open containers in plain view in the center cupholders inside the Ford Expedition. An officer performed a probable cause search.

“Also in plain view was a soft-sided rifle case, pair of black gloves and a black mask on the front passenger seat,” the affidavit says.

There was a Ruger 10/22 on the floor of the back seat with one round in the chamber and a magazine with 28 rounds, the affidavit says. The .22-caliber rifle is a semiautomatic weapon.

Robinson was taken to the Douglas County Jail and read his rights; he then allegedly told police that “this (expletive) is crazy” and denied any knowledge of the rifle in the vehicle. He did say the open containers were his, but from much earlier in the day, the affidavit says.

Robinson was released from the jail on $3,250 surety bond, jail records indicate. His first appearance, where he will be formally charged, is scheduled for Nov. 19.