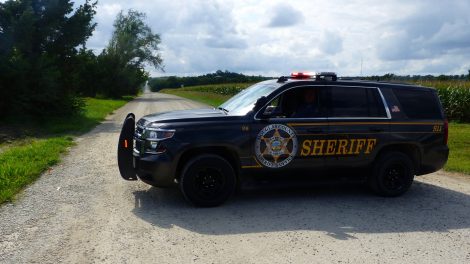 In this Journal-World file photo from 2017, a Douglas County sheriff's deputy's vehicle blocks off a county road near Lawrence.

One person was taken to Lawrence Memorial Hospital with minor injuries after a two-car accident Wednesday evening, according to the Douglas County Sheriff’s Office.

Deputies responded at approximately 7:45 p.m. Wednesday to the accident at the intersection of U.S. 59 Highway and North 1200 Road, according to Deputy Charlie Cooper, public information officer for the sheriff’s department.

A white Ford Edge with two occupants was headed westbound, entered the intersection and struck a silver Chevrolet Tahoe, causing it to roll over, Cooper said via email. It was not immediately clear from information available Wednesday in which vehicle the injured person had been an occupant.

The driver of the Edge was cited for failure to obey a traffic control device, Cooper said.