A look at the 5 federal death row inmates facing execution; one is from Kansas 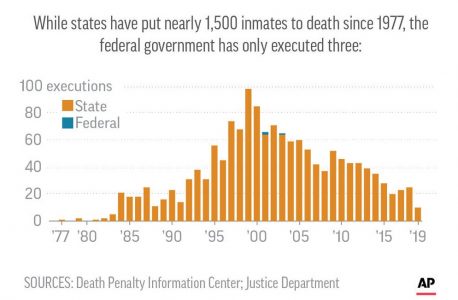 WASHINGTON — The Justice Department announced Thursday that it will resume executing death row prisoners for the first time in nearly two decades.

At the direction of Attorney General William Barr, the federal Bureau of Prisons has scheduled the executions of five inmates being held on death row at USP Terre Haute, a high-security penitentiary in Indiana.

Here’s a look at the inmates who are scheduled to be executed beginning in December.

Danny Lee, of Yukon, Okla., was convicted in the 1996 deaths of an Arkansas family as part of a plot to set up a whites-only nation in the Pacific Northwest.

Lee and an accomplice, Chevie Kehoe, were convicted of killing gun dealer William Mueller, his wife, Nancy Mueller, and her 8-year-old daughter, Sarah Powell, and stealing guns and cash.

Lee’s attorney, Morris Moon, said his client’s case “exemplifies many of the serious flaws in the federal death penalty system” and that “executing him would be a grave injustice.” Moon says there was more evidence against Kehoe — described by federal prosecutors at the time as the leader of the plot — but he received a life sentence.

Lee was convicted in 1999 in Arkansas. A federal judge denied Lee’s request for a new trial in February, but noted that evidence presented by his attorneys “is reasonably likely” to have led to a different sentence.

He is the first inmate scheduled to be executed, on Dec. 9.

Lezmond Mitchell, a Navajo man, stabbed a 63-year-old woman to death in 2001 and then forced her 9-year-old granddaughter to sit beside her grandmother’s lifeless body as he drove about 40 miles, before he slit the young girl’s throat.

Their beheaded, mutilated bodies were found in a shallow grave on the reservation. Mitchell stole the woman’s car and later robbed a trading post in Red Valley, Ariz.

He’s scheduled to be executed two days after Lee.

The Bureau of Prisons plans to execute Wesley Ira Purkey on Dec. 13. He was convicted of raping and killing Jennifer Long, a 16-year-old girl, before dismembering, burning and then dumping the teen’s body in a septic pond in Clearwater, Kan.

Prosecutors said he was also convicted in a state court in Kansas after using a claw hammer to kill an 80-year-old Kansas City, Kan., resident, Mary Ruth Bales, who suffered from polio.

Purkey, who is from Lansing, is slated to be executed on Dec. 13.

Prosecutors say Alfred Bourgeois tortured, sexually molested, and then beat his two-and-a-half-year-old daughter to death. Court records say Bourgeois repeatedly beat the young girl and punched her in the face, whipped her with an electrical cord and beat her with a belt so hard that it broke. He also allegedly burned her feet with a cigarette lighter and hit her in the head with a baseball bat until her head swelled.

He was convicted in 2004 of several charges, including murder, and was sentenced to death. He’s scheduled to be executed on Jan. 13.

Dustin Lee Honken was convicted in 2004 in connection with the killings of five people as part of a plan to thwart a federal investigation into his drug operation.

The victims included two men who became informants and were going to testify against him, the girlfriend of one of the informants and her two young daughters, ages six and 10.

Honken was convicted in federal court in Iowa in 2004 and is scheduled to be executed on Jan. 15. 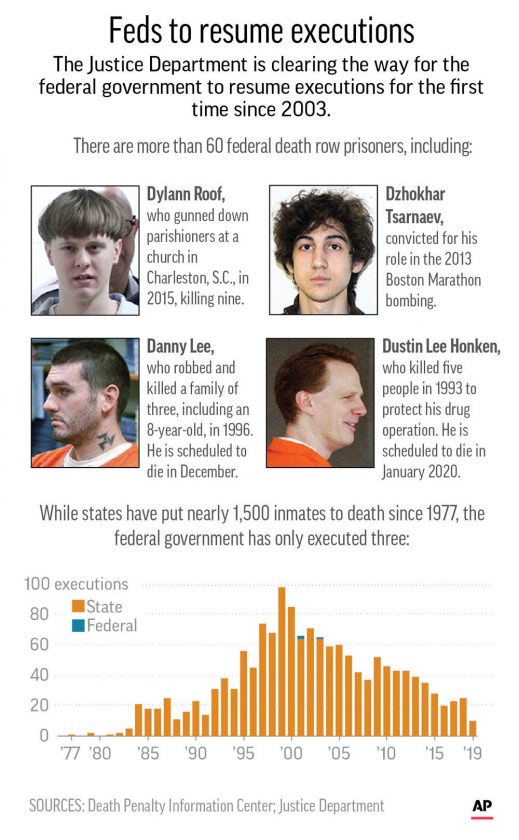