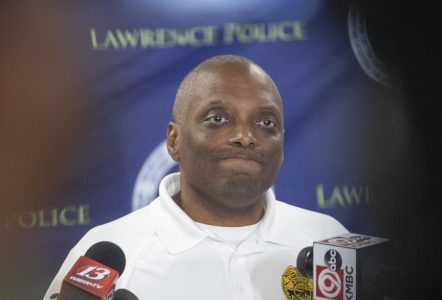 Lawrence Police Chief Gregory Burns conducts a news briefing Monday at the Investigations and Training Center, 4820 Bob Billings Parkway, regarding the death of a child left unattended in a car Sunday in the 3300 block of Iowa Street. Burns identified the child as Devonte Lashawn Turner, age 2.

Lawrence police have identified the child who was found dead inside a parked car Sunday afternoon as DéVonté Lashawn Turner.

Police Chief Gregory Burns Jr. at a news conference on Monday said the 2-year-old Lawrence boy at the time was in the care of family members who were not his parents, but Burns would not be more specific. He said a death investigation was underway and that it appears heat may have contributed to the boy’s death.

Burns said at this point in the investigation no arrests have been made. Burns described the child’s death as tragic; however, he reiterated that the police department still did not know the specific circumstances of the situation.

“As those involved attempt to heal from this loss, our thoughts are with everyone who has been affected by this event,” Burns said. “Anytime we lose a citizen of our city it’s very tragic. This tragedy is only compounded when it involves a child.”

Burns said the event served as a reminder for people to take extra care when exiting their vehicles, especially this time of year when temperatures are high.

When asked how long DéVonté had been in the car and whether a cause of death had been determined, Burns said he did not have that information at this time. He said police would be investigating any and all factors as part of the death investigation.

Regarding who found the child and who alerted authorities, Capt. Adam Heffley, who is overseeing the investigation, said that information was known but was not being released to protect the integrity of the investigation.

“We do have that information but are not willing to give that out at this time,” Heffley said. “That is part of the investigation that will be looked at thoroughly, worked through and at the conclusion of this given to the proper charging authorities, if that is something that they wish to pursue.”

In response to additional questions from reporters, Sgt. Amy Rhoads said that no additional details or information about the investigation could be provided at this time but that if more information became available it would be communicated.

As the Journal-World previously reported, police responded to a residence in the 3300 block of Iowa Street after receiving a call that a 2-year-old had been left unattended in a parked car just after 5:30 p.m. Sunday.

On arrival, first responders determined that the child had died.

The only residentially zoned property in the 3300 block of Iowa Street is the Easy Living mobile home park at 3323 Iowa St., behind the movie theater and divided retail building that used to be J.C. Penney.

According to the National Weather Service in Topeka, the temperature in Lawrence reached a high of 88 degrees Sunday afternoon. An online calculator says that within 10 minutes in 88-degree heat, the interior of a car can reach 107 degrees.