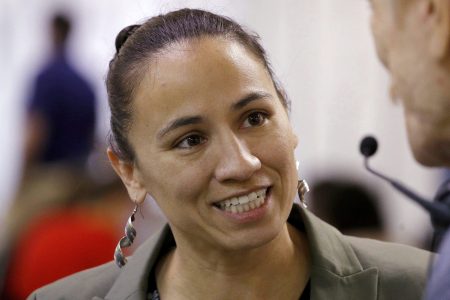 In this Oct. 1, 2018, file photo, Sharice Davids is pictured in Overland Park

TOPEKA — Democratic Kansas Rep. Sharice Davids says President Donald Trump’s call for China to investigate former Vice President Joe Biden is “a clear abuse of power and far beneath of the office of the president.”

Davids said Thursday that Trump is inviting foreign interference in U.S. elections and his comments reinforce the need for an investigation of his administration.

But fellow Kansan and Republican Rep. Ron Estes said there’s nothing wrong with a president asking another nation to investigate potential corruption within its borders.

Estes said Thursday that those who have “searched for any reason” to impeach Trump should set politics aside.