Congressman Watkins is focused on trade agreement, not the impeachment inquiry, he tells Lawrence farmers 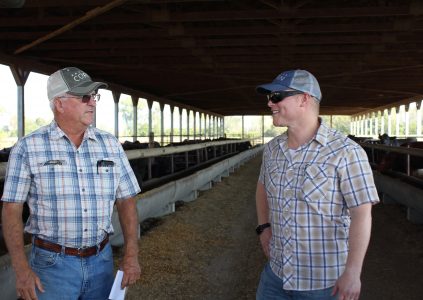 U.S. Rep. Steve Watkins meets with Pat Ross of Nunemaker-Ross Inc. farm in Lawrence on Oct. 1, 2019, as the first stop on his day of farm tours.

Second District Congressman Steve Watkins told Lawrence farmers Tuesday that one of his priorities would be to get the United States-Mexico-Canada Agreement, or USMCA, pushed through when Congress returns from its recess.

“It seems like some of the Democrats might have other ideas about what is most important for the country right now,” Watkins said, referencing the impeachment inquiry against President Donald Trump, “but we are going to focus on USMCA.”

He said he thought a lot of people were focused on impeachment, but “in my opinion [Trump] has undergone investigations for years now, and I think this is just the latest. I think our focus really ought to be on USMCA.”

The USMCA would replace the North American Free Trade Agreement, or NAFTA.

Josh Roe, vice president of a group called Kansas Corn, said the USMCA would positively affect farmers as it would allow them to continue duty-free agriculture trade with Canada and Mexico, which is already in place as part of NAFTA. From time to time, however, the Trump administration threatens to revoke NAFTA, Kansas Corn CEO Greg Krissek said, “which then would eliminate the good trading relationship we have.” If the USMCA were approved, U.S. farmers would not have to worry about a possible suspension of duty-free trade.

Roe added that USMCA would update conditions concerning electronic communications and financial transfers, making it easier for transactions to occur in a modern technological fashion.

Watkins visited the Nunemaker-Ross Inc. farm, 1687 East 1600 Road, Tuesday morning as the first stop of three in a day of farm tours. He was scheduled to visit farms in Muscotah and Topeka in the afternoon.

Pat Ross, one of the members in the family partnership that runs Nunemaker-Ross, had invited Watkins to visit the farm when he met him in person in Washington, D.C., in July.

“I never dreamed that he would actually show up,” Ross said. “We need to have some contact in D.C. where we can feel confident that our voice is being heard. So anytime we can have an event like this I think is a plus for us.”

Watkins spent a little less than an hour with Ross, who showed him the farm’s cattle feedlot and grain elevator. He told Watkins it had been a “challenging year” because of flooding in the Kansas River bottom, where most of his land lies. 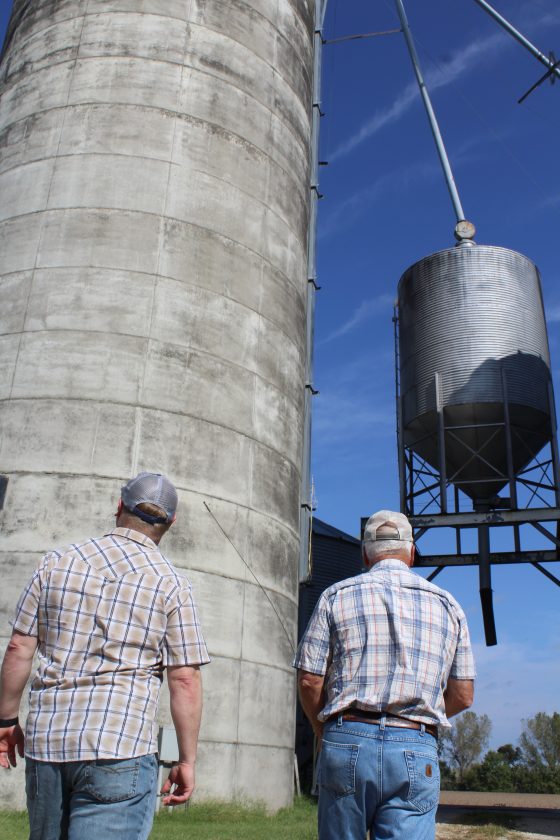 “I’ve been farming full time since 1973, and this is the first time I can ever remember having acres that we could not get planted,” he said. “Thank goodness for crop insurance.”

Watkins told Ross that flood and river management is “something we’ve got to take a closer look at.”

Ross also said the trade war with China has been tough on farmers.

The U.S. has been in the midst of a trade war with China since July 2018. In early August, China announced it would not purchase any agricultural products from the U.S.

Watkins said the trade war was “honestly something we focus on all the time.” He said that trade with China is more complex than relations with Canada and Mexico, for example, due to intellectual property theft considerations.

“Our strategy as a House is to try and lock in a very good USMCA program and then focus our attention on China,” he said.

“I think it would pass if it were to go to a floor vote. And I think it should. It’s something that we in Washington are trying to make happen, and we are not going to stop until it does happen.”

Ross also told Watkins that he was pleased with the Sept. 25 U.S.-Japan Trade Agreement, in which Japan agreed to reduce or eliminate tariffs on some U.S. food and agricultural products.

For beef exports, this agreement put the United States on an equal playing field with Australia, which previously had lower tariff rates, Roe said. And Ross said he already “saw a good increase in our beef prices last week.”

Watkins avoided commenting on Trump’s response to the impeachment inquiry. He said, “My focus today is on USMCA … and that ought to be the focus of Congress.”

However, in a Sept. 25 email to the media, Watkins blasted the impeachment inquiry as a Democratic “stunt.”

“This stunt,” he wrote, “shows that the Democrats care more about their own divisive stunts than they do about working together on issues that the American people care about.”

Watkins is facing a primary challenger in his 2020 bid for reelection.

As The Associated Press reported last month, Kansas’ Republican state treasurer, Jake LaTurner, abandoned a campaign for an open Senate seat to challenge Watkins, whom he described as vulnerable to Democratic defeat.