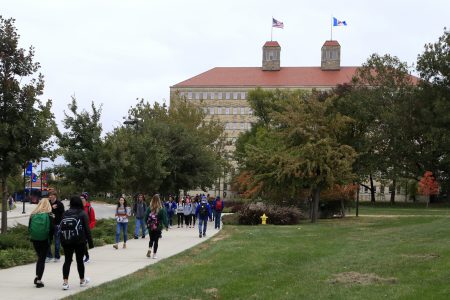 In this Oct. 24, 2019, file photo, students walk in front of Fraser Hall on the University of Kansas campus in Lawrence, Kan. (AP Photo/Orlin Wagner, File)

UPDATED STORY (July 15): Everyone returning to KU’s campus in the fall will be tested for COVID-19, Girod says; masks will be required

Five weeks before thousands of students, faculty and staff members at the University of Kansas are scheduled to return to some form of in-person instruction while the COVID-19 pandemic continues, a plan to widely test the community for the disease is still in development.

When the Journal-World asked for details on the plan Tuesday, KU spokesperson Erinn Barcomb-Peterson didn’t offer any.

“This is among the work in development for reopening, and we will have further details in the days ahead,” she said in an email.

In past weeks, KU Chancellor Douglas Girod has mentioned the development of a “fairly robust” testing program that will involve the university partnering with both state and local health officials. Beyond that, no details have been released, including how often those on campus can expect to be tested, or how much a testing program will cost.

To conduct the testing program, Watkins Health Services, KU’s on-campus health care provider, will partner with The University of Kansas Health System and Lawrence Memorial Hospital, Girod said in June. The partnership will also be coordinated with Lawrence-Douglas County Public Health and the Kansas Department of Health and Environment.

Since the June 15 announcement that KU would shorten its fall semester to avoid a pandemic resurgence, the Journal-World has also reached out to all of the partnering entities seeking details on the plan. The agencies either did not respond, or said it was too early to know the plan’s details.

Other universities around the country have already released COVID-19 testing plans for the fall semester. Namely, Purdue University in Indiana, which said last week it would require all 40,000 of its students to be tested for the respiratory virus prior to coming to campus — at no cost to the students.

If a Purdue student refused to be tested, it could affect their ability to attend classes or move into a residence hall, according to the university’s plan.

Boston University released a plan in May to set up its own testing lab for testing their roughly 40,000 students and staff members. It is, by the university’s own admission, “a massive undertaking”, but one they thought was necessary after being unable to guarantee quick returns for vast quantities of tests when the campus resumes operations.

KU on June 29 announced a plan for reopening called Protect KU, but it did not address testing procedures — only locations where community members may be able to obtain a test. The Protect KU plan also created a Pandemic Medical Advisory Team that is tasked with overseeing the testing and contact tracing operation at the university.

KU will begin its fall semester on Aug. 24. 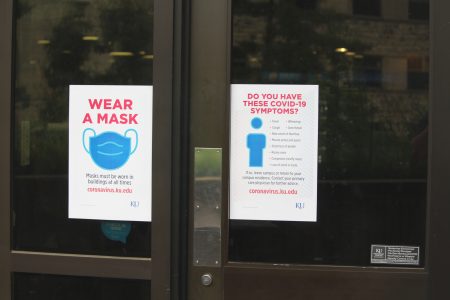