Learn about book conservation, KU’s Spanish and Portuguese department at 2 exhibits on campus 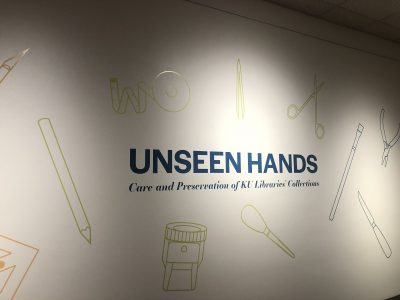 "Unseen Hands" is a Spencer Research Library exhibit that focuses on the work the Conservation Services Department does to keep materials, including rare books and special collections, in working order.

The Kenneth Spencer Research Library explains some techniques and practices in an exhibit that closes next Friday, Jan. 17.

This exhibit, “Unseen Hands,” is one of two free KU Libraries exhibits that will close this month. The other, “Strong Foundations,” is located in Watson Library and celebrates more than a century of Spanish and Portuguese studies at KU. It closes Jan. 31.

Here’s what you need to know about the two exhibits.

The public has one more week to view “Unseen Hands,” a Spencer Research Library exhibit that focuses on the work the university’s conservators do to keep materials, including rare books and special collections, in working order.

“A lot of the work we do is sort of behind the scenes,” said Whitney Baker, head of conservation services for KU Libraries. “If we’ve done it well, you won’t really notice it. But it’s essential that we preserve our collections and keep them in good working order so people can come and use them.”

This exhibit explains that behind-the-scenes work in a series of five displays, which give a general overview of the conservation services department and the techniques it uses to preserve audiovisual material, paper products and more.

“We call ourselves conservators. We are not restorers,” Baker said. “Because that kind of denotes taking something back to how it originally looked, and often that’s not known, so you wouldn’t want to guess. Our goal is to stabilize material as it currently is to make it available into the future.”

Part of the exhibit shows how conservators use special Japanese paper-mending strips to help preserve pages with holes or missing sections. The exhibit also explains how conservators must monitor the temperature, relative humidity and light of their stored collections. 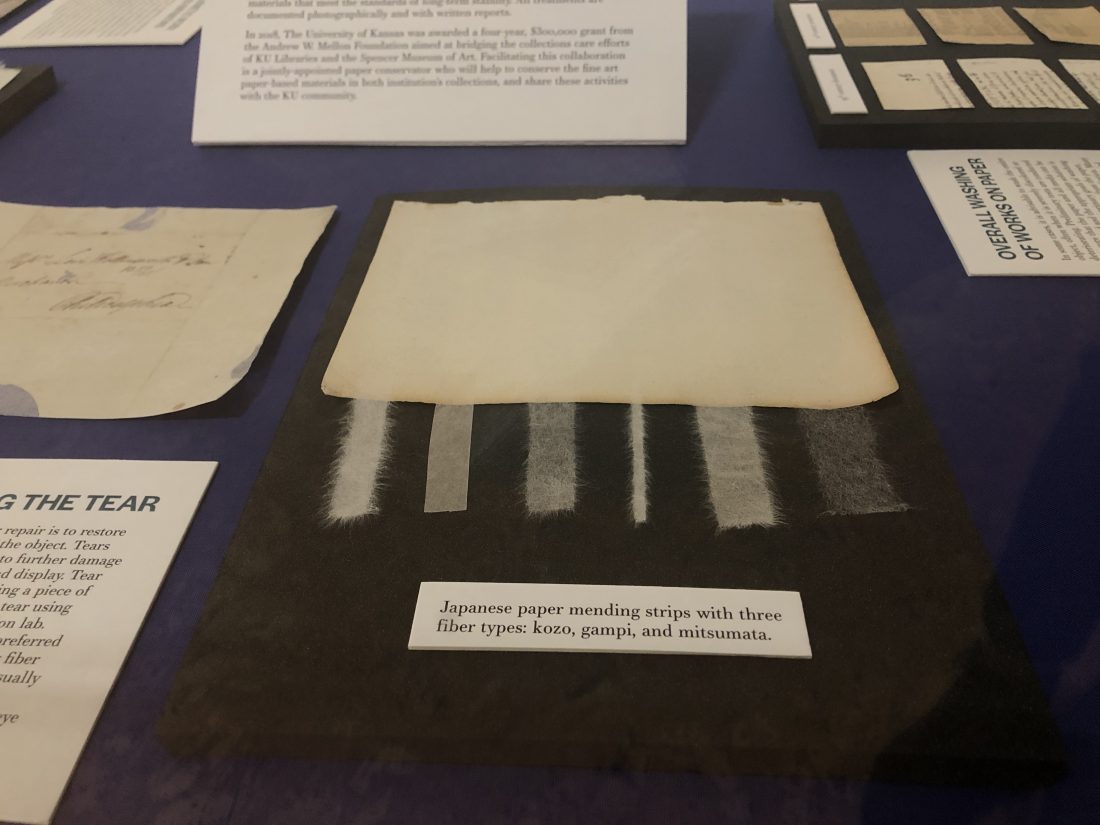 Altogether, Baker said, it’s a good introduction to a part of the university’s libraries that doesn’t get much attention.

“They should rush here in the next week to come and learn about something they might not know,” Baker said. “You can get a better sense of what KU Libraries is about.”

The exhibit is open 9 a.m. to 5 p.m. Monday through Friday of next week at the Spencer Research Library, 1450 Poplar Lane.

This exhibit in the lobby of KU’s main student library celebrates over 100 years of scholarship within KU’s Department of Spanish and Portuguese and is open until the end of the month.

“I don’t think people necessarily have an understanding of the rich history of this department and really the global reach of the Department of Spanish and Portuguese,” said Sarah Goodwin Thiel, coordinator of the exhibit. “It’s really very impressive.” 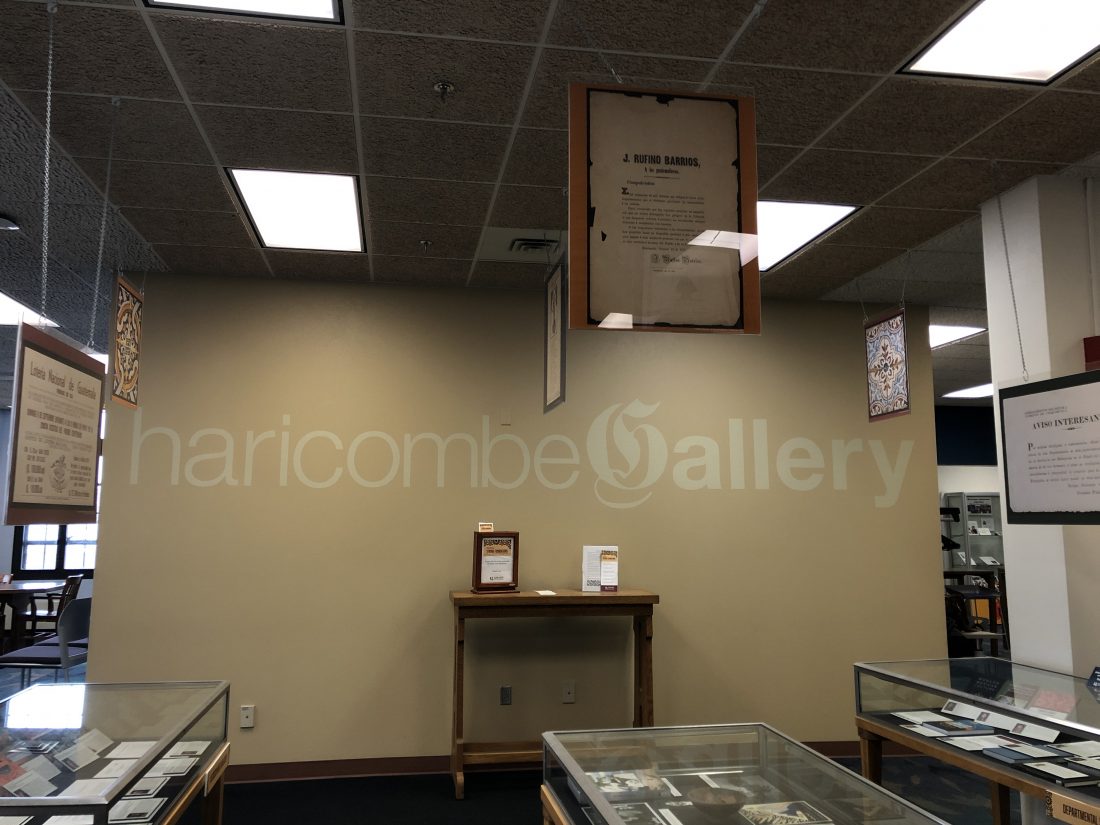 The “Strong Foundations” exhibit, which celebrates over 100 years of Hispanism at the University of Kansas, is located in the Watson Library’s Haricombe Gallery.

Goodwin Thiel said one notable section of the exhibit features postcards from Shelley Miller, a “much-loved librarian” of the Spanish and Portuguese department who would travel the world getting books and materials.

“She was just a prolific postcard writer, so we would write all the faculty and all of her friends. So they have a whole collection of the postcards she had sent back here,” Goodwin Thiel said.

“Go look in the stacks for Magdalena, a play written in 1900,” one of the postcards states. “I saw it last night. It’s good.”

Another reads: “Monday is the anniversary of a student attack on the presidential palace in 1957, so we’ll listen to a historic speech on ‘Radio Reloj.’ So far the visit has been fascinating. It’s utterly ’emocionante’ to be here.” 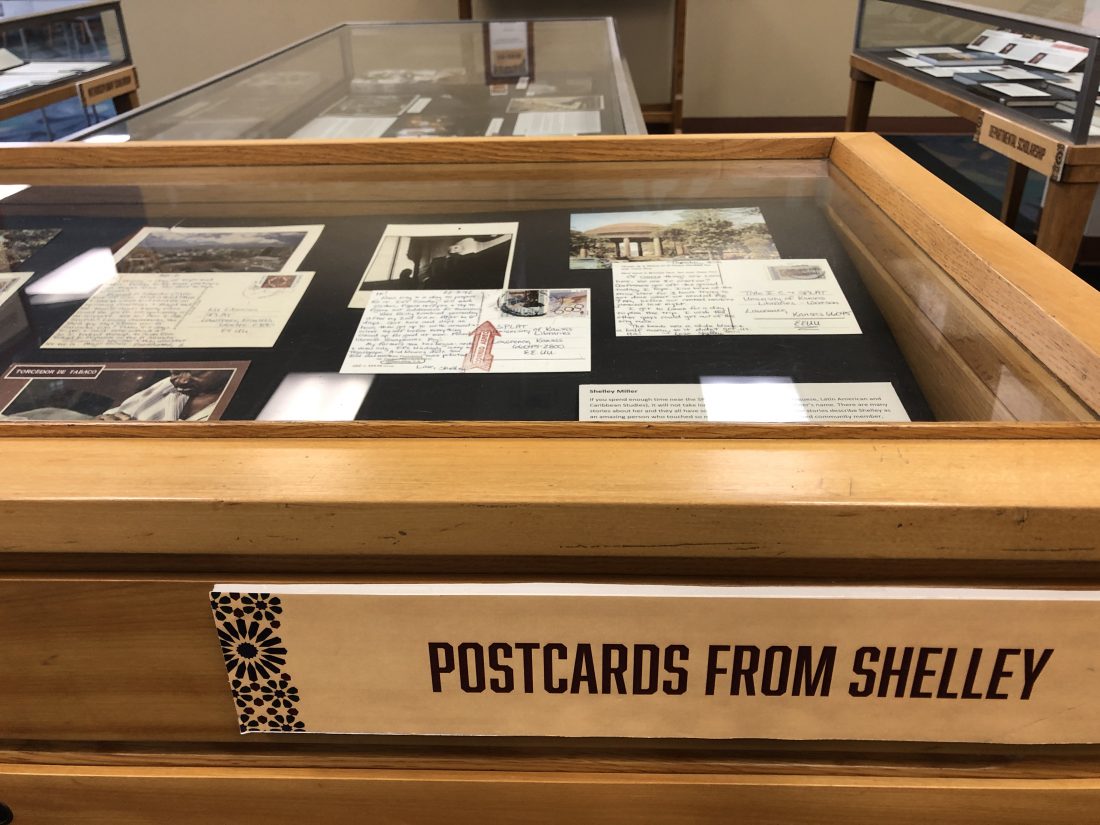 The “Strong Foundations” exhibit at Watson Library features postcards from librarian Shelley Miller, who would send notes from across the world, as she gathered books and materials for the Department of Spanish and Portuguese.

Goodwin Thiel said the exhibit was fun to put together and described it as a “treasure hunt” into the department’s reach and history.