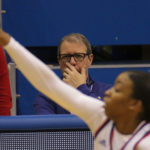 KU chancelor Doug Girod cheers on the Jayhawks in their game against Oklahoma at Allen Fieldhouse, Jan. 30, 2019.

University of Kansas Chancellor Douglas Girod is listed as an attendee for an upcoming congressional hearing on student-athlete compensation, according to a release from Sen. Jerry Moran’s office.

The hearing, which will be held Tuesday in Washington, is titled, “Name, Image, and Likeness: The State of Intercollegiate Athlete Compensation.” Moran, a Kansas Republican, will be leading the hearing.

The release said attendees at the hearing would discuss the use of third-party agents, definitions of amateurism, and what kinds of incentives should be made available to college athletes, among other topics.

The hearing will take place at 10 a.m. Tuesday and can be viewed live on commerce.senate.gov.