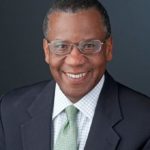 The University of Kansas’ vice chancellor for public affairs is leaving his role to serve as president and CEO of Kansas Health Foundation, KU Chancellor Douglas Girod announced Friday.

Vice Chancellor Reggie Robinson was named as the new leader of the public health nonprofit organization Friday morning. His last day at KU will be in November, and he will start his new role Dec. 1.

“While this is a loss for our university, I am delighted for Reggie, who has been an invaluable asset to KU and will undoubtedly do great work in his new role,” Girod wrote in a public announcement. “Reggie describes his new position with the Kansas Health Foundation as a ‘dream job’ that he couldn’t turn down. As a healthcare practitioner, it makes me smile to know our state and society will benefit from Reggie’s leadership of such an impactful non-profit organization.”

Girod said he had already begun the process of finding an interim vice chancellor for public affairs and that he would “share details about this process in the coming weeks.”

As vice chancellor, Robinson contributed to work on campus alcohol policy, corporate sponsorships and the Kansas Team Health model of student-athlete care. He also helped develop the framework for the university’s strategic plan, Girod said. Previously, he served as director of the School of Public Affairs and Administration, was chief of staff to Chancellor Robert Hemenway and was a member of the KU law faculty.