KU chancellor gets 9% raise while other public university leaders get 2.5%; Girod donating raise 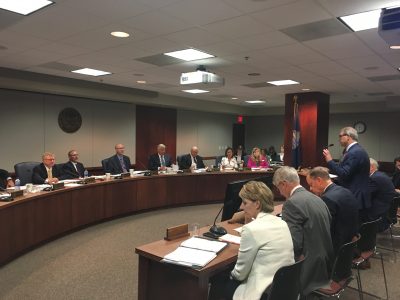 KU Chancellor Douglas Girod addresses the Kansas Board of Regents at a meeting on Sept. 18, 2019.

For fiscal year 2020 Girod’s salary is $600,000. This is a $50,000 raise from the last fiscal year, and Girod said he would donate his raise to KU’s Student Affairs Emergency Fund, which provides financial assistance to students who have an immediate unexpected expense because of circumstances beyond their control.

“My family and I are fortunate and blessed to be in the position we are in, and I would much prefer that this year’s salary adjustment be directed toward KU students who need it most,” Girod said in an email to the Journal-World.

At a Board of Regents meeting on Wednesday, it was announced that all of the public university presidents would be receiving a 2.5% increase except for Andy Tompkins of Wichita State University, due to his status as interim president.

Regents Chair Shane Bangerter said this raise encompassed the 2.5% raise and additional market adjustments that would make his salary closer to those of peer institutions. He also said the raise was a reward for Girod’s performance:

“We feel like he has the University of Kansas on a really positive track to really succeed going into the future, and we wanted to send a message to him that we appreciated that and also to put him on par [with his peers].”

Bangerter commended Girod on helping to keep KU accessible, affordable and in a good financial position for future success. He also said Girod has “played a huge role” in communication with the Legislature to receive funding to keep tuition flat. For in-state students this year, there was no tuition increase. For out-of-state students, tuition increased by 2.5%.

When asked what Girod might improve upon, Bangerter responded by stating that enrollment was a key issue facing all of the Kansas public universities. Girod has a “great plan” to address this challenge, Bangerter said, but he supposes it will continue to be an issue for the next decade.

Regarding Girod’s promise to give his raise to the students, Bangerter said, “If that’s what he chooses to do, that is within his prerogative.”

He noted that Girod could be making a lot more money as a physician: “He’s doing this as a service to the university and to the state. We just wanted to show him that appreciation.”

When asked if Girod would find it inappropriate to accept a raise after the major budget cuts affecting other parts of campus, Girod avoided the question, simply stating that the board instituted the raise to help recruit and keep qualified CEOs, and concluding with his statement that he would prefer to give the money to students who need it most.

The 2.5% raise for university presidents is the same percentage raise KU faculty and staff on the Lawrence campus will receive in October.

With the added raises approved Wednesday, fiscal year 2020 salaries for the six Kansas public university leaders are as follows: