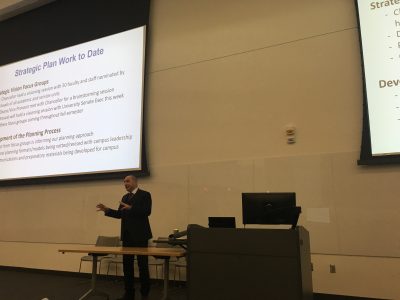 KU Interim Provost Carl Lejuez addresses the crowd at the first community forum of the semester on Sept. 16, 2019.

The University of Kansas expects to fill the provost position — the No. 2 leadership spot at KU — by the end of this semester, according to interim Provost Carl Lejuez, who hosted a wide-ranging community forum Monday in KU’s Slawson Hall.

Lejuez, who has served as interim provost since spring 2018 and who has applied for the permanent position, began the forum as he ended it, focusing on some of the university’s recent accomplishments. Between the bits of good news, he addressed the budget, strategic plan and university updates. He ended the forum with a question-and-answer session with the 100 or so in attendance.

Some of the good news included that the university had its lowest tuition increase since 1983, its highest raise percentage since 2009 (2.5%) and no added budget cuts following last year’s 5.87% base cut. One piece of good news even allowed Lejuez to crack a joke to the serious crowd: A new beekeeping club on campus is creating a lot of “buzz.”

In discussing the budget, Lejuez said a priority was to keep tuition low.

“We don’t want to run the university on the backs of our students, but as we have fewer resources from the state, we really have to try to balance those,” he said.

No money will be spent on additional new buildings, he said.

“Now what I don’t mean is debt service on one of our new buildings; I mean any money going towards additional new buildings,” he said. “I made a commitment that until we are more fiscally sound we are going to be very careful about making big decisions about buildings.”

Additionally, Lejuez noted that for the first time tuition support for dependents of KU employees will be available.

Lejuez also indicated that KU has created guardrails on the budget model. Next year, budgets for the university’s schools and colleges will only be affected positively or negatively by 1%. In the years following, budgets will change only by 2% in either direction.

“I know I still talk about the budget a lot,” Lejuez said. “I do that because there are many people who still want me to do that. But we have to pivot from a focus on the budget to a focus on vision, a focus on innovation, things that make the university great.”

The university’s strategic plan is in the early stages of development and will be announced at the end of the academic year. The chancellor will launch major development of the plan later in the semester so that the new provost will have the opportunity to participate and contribute, Lejuez said.

During the question-and-answer session, Lejuez responded to a participant who wondered why Chancellor Douglas Girod wasn’t more public and why Girod was not the one delivering the community forum.

Lejuez said he wanted to “push back on the idea that the chancellor is not active,” noting that he does a good job of sharing the university’s story throughout the state.

“We believe in a division of labor,” he said. “I am the person who executes. The chancellor develops the vision.”

The question-and-answer session was dominated by speakers upset at the university’s recent announcement to cut funds for the Center for STEM Learning and, with it, the UKanTeach program. The program allows students to major in a STEM discipline and receive a teaching license instead of having to acquire an undergraduate degree in education. Seven individuals stepped up to voice concern and anger about the cuts, and most were met with applause.