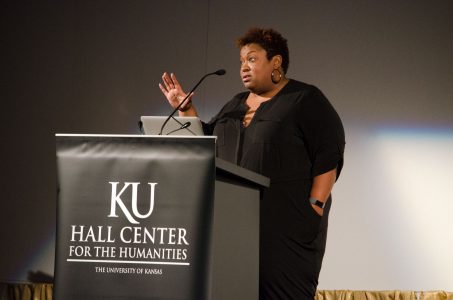 Brittney Cooper opened the University of Kansas’ Hall Center lecture series on Thursday night with a charge to not fear the future but to embrace its possibilities, specifically urging her audience to be “world makers,” not “space takers.”

The Liberty Hall presentation by Cooper, a prominent black feminist, was the first of five free humanities lectures in KU’s 2019-2020 school year.

Cooper is the author of “Eloquent Rage: A Black Feminist Discovers Her Superpower” and “Beyond Respectability: The Intellectual Thought of Race Women.” She is also co-founder of the Crunk Feminist Collective blog — the reason many know her as “Professor Crunk” — and is an associate professor of Women’s and Gender Studies and Africana Studies at Rutgers University.

Prior to the lecture, KU senior Michelle Oboro, 22, sat front and center, “Eloquent Rage” in hand, about 45 minutes before Cooper took the stage. She called Cooper her hero.

“She’s inspired me to basically put a label onto what I want to do for the rest of my life,” she said. “It’s refreshing to see someone that looks like me that’s taken seriously.”

She added, “We’re going to take a selfie after.”

Cooper’s central message was for people to be more cognizant of whether they are just “taking up space” or are actively contributing to improving the world.

“These are enraging times, and I haven’t said one explicit word about the Trump administration yet,” Cooper said early in her lecture, garnering laughter from the audience, who remained vocal throughout her talk with whoops, snaps and shouted exclamations of “amen” and “word.”

She challenged the audience to rethink how we define “participation” in social justice.

“Don’t just come to my talk and think you have done the work,” she said. Justice needs to be put into practice, and white people need to check other white people on their “(BS),” she said.

Cooper spent a large portion of her lecture talking about universities. She said another title for her lecture could have been “Whose humanities?”

She said the university shouldn’t simply be a place of career training but a place to learn how to deal with real life issues — and the humanities are a good place to start, but only, Cooper stressed, if the humanities include diverse voices, such as those of women, people of color, and queer, trans and indigenous people.

“Whose humanities? Our humanities,” she said, emphasizing inclusion.

“Another world is possible,” Cooper said. “You can change things.”

When Cooper first walked onto the stage — and before even saying a word — one man in the audience stood in applause. By the end of her talk, the whole audience was on its feet.

Glenn Frizell, the early applauder, said he felt “inspired to do more” after hearing Cooper speak.

“I just like her vision of world changing,” said Frizell, a 39-year-old middle school teacher who drove from Kansas City, Mo., to attend the lecture.

Also attending were retired KU professors Dick and Barbara Schowen. Barbara, 80, told the Journal-World before the lecture that the topic was “interesting and timely.”

After the lecture, Oboro joined dozens of others in line for Cooper’s book signing, where she also got the photo she had resolved to take with her hero.

Previously, the Hall Lecture Series has brought authors and scholars such as Jesmyn Ward, Gwendolyn Brooks and Richard Dawkins to the Lawrence community. Founded in 1947, it is the oldest continuing lecture series at KU. Upcoming speakers are Sarah Deer, Alan Alda, Nadine Strossen and Kwame Anthony Appiah. The next lecture will be given by indigenous women activist Deer on Oct. 1. 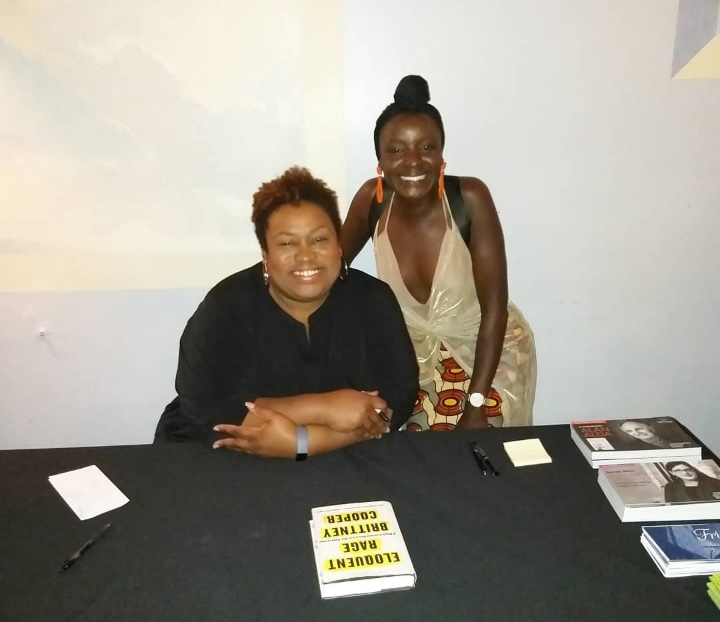 photo by: Contributed by Michelle Oboro