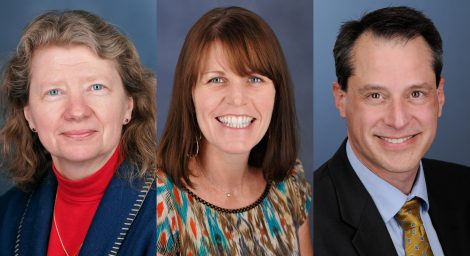 photo by: Photos courtesy of the University of Kansas

Three University of Kansas professors have received the Chancellors Club Teaching Professorship, which recognizes longtime excellent educators at the university and comes with a $10,000 bonus every year for the next five years.

Nordheden, an associate professor in the Department of Chemical and Petroleum Engineering, is known for splitting up her large introductory classes into the four Hogwarts houses — as designated in the “Harry Potter” series. After homework sets are received and graded, she announces which house did the best. She also accompanied students on a study-abroad program in New Zealand, where they visited work sites and saw firsthand the size of the equipment they discuss in the classroom.

The Chancellors Club recognition, she said, “helps to support my enthusiasm about teaching.”

In his letter of nomination, former colleague Michael Detamore said her “courses have a high level of rigor, clarity and structure, with highly effective classroom delivery, as her student evaluations accurately reflect.”

Parsons, a professor in the Department of Civil, Environmental and Architectural Engineering, has been teaching the introductory geotechnical course to undergraduates every semester since he began in 1998. He’s known for letting his students practice taking soil samples on his own land and hands-on technical trips in Douglas County to allow for a small-group experiences.

Parsons was “surprised and honored” to win, and he thanked his nominators, one of whom credited Parsons for helping him succeed as a new faculty member.

“I’m a better instructor today because of the help he gave me,” Steven Schrock wrote.

Rossomondo, an associate professor in the Department of Spanish and Portuguese, helped develop Acceso, an online intermediate Spanish curriculum that is used in classrooms across the U.S. and has helped KU students save about $900,000 in textbook costs since its 2009 inception.

She said she was “thrilled” about the award but that she “would really like to highlight that a lot of the work I do is collaborative in nature,” giving credit to lecturers and grad students who have also helped with the program.

Her nominator, colleague Stuart Day, said, “She is so committed to her classes and so thoroughly engaged in what she does that students often feel transformed after a semester in her classroom.”

The three professors had different plans for their extra yearly $10,000.

Nordheden said she hadn’t given much thought to how she’d spend it but that as a homeowner her thoughts immediately veered to financial responsibilities. But, she added, “there might be a new piece of jewelry in my future.”

Parsons said a lot of the money would go to support his four daughters’ college funds but that the family was also considering taking their first trip to Europe. After he heard he had won, their prospects of visiting Rome, Athens and Jerusalem went from “wouldn’t it be nice” to a serious entertainment of the possibility.

Rossomondo also plans to use the money to help support her child’s education.

“I have a senior in high school, so this award has come at the most welcome of times,” she said.