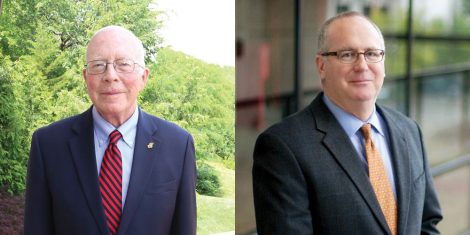 Don Brada, left, and Jeff Kennedy, right, are the University of Kansas’ Alumni Association's 2019 recipients of the Fred Ellsworth Medallion for extraordinary service to the university.

The University of Kansas Alumni Association on Thursday will honor two recipients of the Fred Ellsworth Medallion, an annual award for extraordinary service to the university.

This year’s winners — Dr. Don Brada and Jeff Kennedy — will be recognized at a celebratory dinner at 7 p.m. at the Adams Alumni Center. Ellsworth, the medallion’s namesake, was a 1922 graduate who served as the Alumni Association’s chief executive for 39 years.

Brada and Kennedy said their time serving on the association’s national board of directors was their most impactful work. Brada, 79, was on the board for six years and said he enjoyed assisting the association’s and the university’s joint efforts to assist higher education issues “swirling around Topeka.” Kennedy, 69, called his seven years on the board an experience he “wouldn’t trade for anything,” noting that he liked learning about the association’s finances.

Brada and Kennedy’s positions on the board came after years of volunteer efforts.

Brada graduated from KU in 1961 with a bachelor’s degree from the College of Liberal Arts and Sciences, followed by a medical degree in 1965. As a physician in the Air Force, Brada hosted an event for Caribbean Jayhawks while he was stationed in Puerto Rico. After moving back home to Hutchinson, he expanded KU’s presence at the State Fair. Brada and his wife, Kay, who is also involved in alumni efforts, then moved to Wichita, where for a time Brada was a professor at the KU School of Medicine. He also advocated for the expansion of the curriculum there from two years to four, an effort he shared with Kennedy. Brada now lives in Lawrence and is retired. He serves as chair of the KU School of Medicine Alumni Association.

“The long list of Don’s volunteer roles for KU doesn’t begin to capture his lifetime of service, both as a student and alumnus,” said Alumni Association president Heath Peterson. “Don is a thoughtful, dedicated and action-oriented Jayhawk. He takes great pride in KU and the many people who have served as stewards of our great institution.”

Kennedy received a degree in journalism from KU in 1981 and later earned a law degree from Washburn University. He has worked for the Wichita law firm Martin, Pringle, Oliver, Wallace & Bauer since 1986. In Wichita, he has served on the board and as president of the KU alumni group. He has also worked with the annual Jayhawk Roundup, recruiting prospective students. He and his wife, Patti Gorham, chaired the event in 2013. Kennedy is a Chancellors Club and Elizabeth Watkins Society member for KU Endowment. Like Brada, he is also a member of Jayhawks for Higher Education.

“Jeff has volunteered for KU for more than 30 years,” said Dale Seuferling, KU Endowment president. “His leadership helped move the School of Medicine-Wichita forward through his effective advocacy and vital connections in the local business community.”

Brada and Kennedy were the first in their families to graduate from a four-year university. On Thursday, they will join the ranks of the 158 other recipients of the Ellsworth Medallion.

About two months ago, when Kennedy heard he would be one of the recipients, he said, “It was just an absolute surprise and it was a wonderful honor. I know from prior Ellsworth dinners who has received the award. It’s a great group of people.”

“I think the most wonderful thing is being able to join the long and impressive list of my predecessors,” he said. “To me, that’s the honor.”

Thursday’s event is invitation-only and will kick off the fall board of directors meetings, which will take place Friday and Saturday.