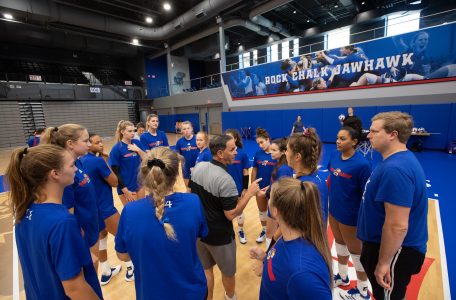 According to KU’s annual Equity in Athletics report, at the University of Kansas the average salary of head coaching positions of men’s teams is over $1.5 million more than that of the head coaches of women’s teams.

The report, which was due Oct. 15 to the NCAA, was recently requested and acquired by the Journal-World. The report also notes that women’s teams, in contrast to men’s, lose millions of dollars a year.

“Coaching salaries are market-driven throughout Power 5 conferences across the country,” Dan Beckler, spokesman for KU Athletics, said in an email. “Salaries for our coaches are reflective of comparable markets, and we routinely review salaries on an annual basis.”

As Beckler noted, KU’s pay scale is similar to those of other Power 5 schools. At the University of Oklahoma, for example, the average annual salary for head coaches of men’s teams was $1,135,835 and $392,725 for women’s teams, according to its 2018 equity report.

At Texas Christian University, the numbers for the average head coach salaries were $1,324,536 and $148,794 for men’s and women’s teams, respectively, according to its 2018 equity report.

Some Power 5 schools with female athletic directors — there are four — also have similar pay scales.

“Historically, in college sports, the highest revenue-producing sports are football and men’s basketball; that trend is reflected at Kansas as well,” Beckler said. “Regardless of revenue, our men’s and women’s teams have access to resources and training that allow them to compete and be successful in the classroom, on their field of play and to prepare them for their future.”

Beckler also said that the Big 12 Conference recently became the second conference to obtain group membership to WeCoach, which is dedicated to recruiting, advancing and retaining female coaches of all sports and levels.

Other findings from the report:

• The overall participant number for men’s teams is 315. For women’s teams, it’s 339. (Women’s basketball, however, includes 13 male participants on the practice squad.)

• No women are the head coaches of men’s teams at KU. For women’s teams, three out of the nine head coaching positions are held by women.

• Compared with reports from previous years, the numbers are largely similar.