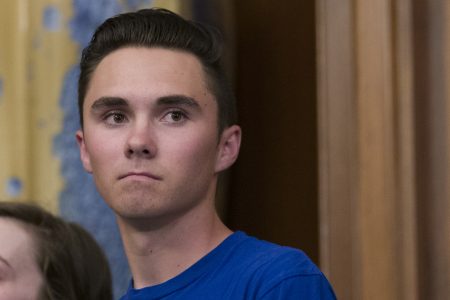 David Hogg, who survived the Parkland, Fla., high school shooting, stands during a news conference to announce the introduction of bipartisan legislation to expand background checks for sales and transfers of firearms, on Capitol Hill, Tuesday, Jan. 8, 2019, in Washington.

A Nov. 15 lecture at the University of Kansas by a survivor of the February 2018 school shooting in Parkland, Fla., has been canceled.

Speaker David Hogg canceled his lecture because of “personal care reasons,” according to the website of the Lied Center, where Hogg was set to speak.

“It’s disappointing,” said Don Haider-Markel, chairman of the political science department at KU and organizer of the event. “I do understand the first year of college can be challenging, and he’s especially been through a lot of challenges.”

Haider-Markel said he found out Thursday night that Hogg canceled the event. While he will not try to reschedule with Hogg, he said he was working to find another speaker for the spring who can address gun politics.

According to the student newspaper The Runner at California State University, Bakersfield, Hogg has canceled all his speaking commitments for this school year. Hogg was also scheduled to speak at the California university, but the student newspaper reports that, according to a news release from the university’s communications director, Hogg’s representative said Hogg’s academic schedule caused him to cancel his lectures. Hogg is a freshman at Harvard University.

Hogg was originally scheduled to speak Nov. 8 in Lawrence, but he pushed back his lecture a week because of a college exam he could not reschedule. His lecture was titled “Putting the USA over the NRA: What we must do to end gun violence.”