‘It gets everyone amped up before kickoff’: The process of procuring military flyovers 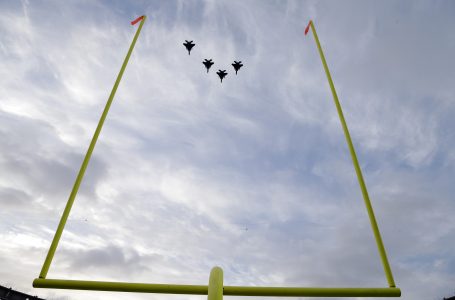 In this file photo from Nov. 1, 2012, Air Force jets fly over a football game between the Kansas City Chiefs and San Diego Chargers in San Diego. (AP Photo/Gregory Bull)

Many Lawrence residents were rattled two weeks ago when, without warning, military jets flew over town to practice their flyover before the University of Kansas football game against Oklahoma the following day.

That might not have been the last time residents will hear the roar of fighter jets overhead this football season, KU Athletics’ new spokesman said, but it certainly should be the only instance of residents not being warned in advance.

Spokesman Dan Beckler said that if KU had another flyover this season, it would likely be for the game against Kansas State University and that the university would be sure to provide notice. KU is currently in the process of requesting a flyover for the Nov. 2 game.

“It’s a powerful spectacle and a highlight for fans as part of pregame festivities to see and hear the power of our military at the completion of our national anthem,” Beckler said. “How often do you get a chance to see a military plane that close? It gets everyone amped up before kickoff.”

In a phone interview, Beckler explained the process of how KU applies for flyovers. First, KU must seek approval through the Federal Aviation Administration. Then, it must apply for a flyover through the Department of Defense. The whole process takes several months, he said.

The university doesn’t have to pay for the flyovers because they are used as training exercises for the military personnel conducting them. Military personnel are required to log a certain number of hours in offsite training, Beckler said, and flyovers help count toward those hours. The group that performed the last flyover came from San Antonio.

Dan Grazier, defense researcher for Washington, D.C.-based watchdog nonprofit Project on Government Oversight, said that F-16s are “actually one of the cheaper ones to fly.”

According to statistics from the Department of Defense released in October of 2018, Air Force F-16s have an hourly operating cost of around $8,000. Other Air Force aircraft are much higher. E-4Bs cost $68,899 per hour and B-2As cost $59,452 per hour. Flyovers are not always performed by the Air Force branch. Grazier said he also knew examples of the Navy and Marine Corps performing flyovers.

Although hourly operating costs for these military aircraft are expensive, Grazier said flyovers do not add to taxpayers’ costs, because they are usually tacked on to the end of normal military training.

“Pilots need flight hours to train. They are supposed to get a certain number every month,” he explained. “It just so happens that in these cases the pilots are flying over sporting events.”

According to a November 2018 article on the U.S. Army’s website posted by a community relations spokeswoman, all flyovers must be completed during daylight hours and comprise no more than four aircraft. The expected audience at the event must also be over 5,000.

The National Guard states on its website that “patriotic events that are free and open to the public and those events designed to enhance Armed Forces recruiting and retention efforts have a higher likelihood of being approved by the Department of Defense.”

Beckler said that not only do flyovers get fans hyped for the game, they also allow for military personnel to be recognized.

“After the flyover, if their schedule permits, we host the pilots at the stadium and recognize them on the field during a game break,” he said. “It’s another great opportunity for our fans to honor the brave men and women that serve our country.”