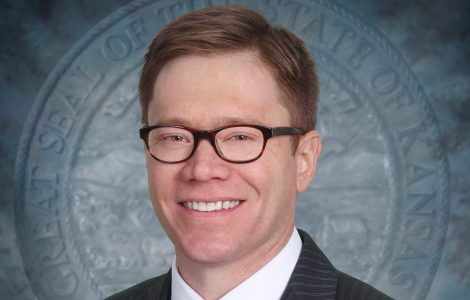 The Kansas secretary of commerce will return to his alma mater on Oct. 22 to deliver the University of Kansas School of Business Anderson Chandler Lecture.

The secretary, David Toland, graduated from KU in 1999 with a bachelor’s degree in political science and returned for a master’s degree in public administration, which he earned in 2001. He was appointed secretary of commerce by Gov. Laura Kelly in January 2019. Since, Toland has been working to develop a new strategic plan and to fill positions in the Department of Commerce that have been vacant for years. Previous to this role, Toland worked as an appointee of ex-Washington, D.C., Mayor Anthony Williams, holding positions in the economic development and planning offices. He also served as the first CEO of a nonprofit called Thrive Allen County.

Toland’s lecture will be at 7 p.m. at Capitol Federal Hall in the Dicus Family Auditorium. The lecture is free and open to the public, but registration is required and can be completed online in advance of the lecture.