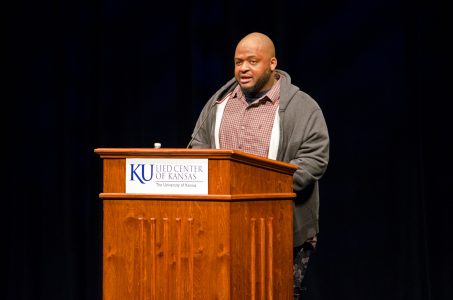 Author Kiese Laymon discusses his contribution to the book "Tale of Two Americas: Stories of Inequality in a Divided Nation" at the Lied Center on Thursday, Oct. 3, 2019.

Kiese Laymon is always revising: his words, his works, himself.

Thursday night at the Lied Center, the acclaimed black author read “Terrors,” a chapter from his memoir “Heavy.” “Terrors” is actually a revision of a previous essay he had written titled “Outside,” which first-year students at the University of Kansas read in this year’s Common Book: “Tales of Two Americas: Stories of Inequality in a Divided Nation.”

“What I want to do is read a revision of that piece because I think it’s important for the students and the writers across the world to understand that just because something is published rarely means that that thing is done,” Laymon said.

For the following 30 minutes, Laymon told the story about his first university teaching job at Vassar College. In “Terrors,” he tells how he constantly failed students.

“When I became a teacher — in this way that ultimately is selfish — I wanted to be everything to my students. I wanted to be the teacher, the mother, the father, the big brother that I didn’t have,” he shared after his reading in a question-and-answer session.

“But I wasn’t trained to do any of that.”

Laymon had to learn how to create “loving boundaries” for his students: to not act as their psychiatrist but rather to offer to walk with them to the professional one on campus, for example.

“We have to admit when we fail, and that is the hardest thing in the world for all of us,” he said.

In “Terrors,” he also discusses a case he heard while serving on the college judicial board, where a white student was let off a charge for drug possession and intent to distribute because he said he had been approached at a club by a “‘big dark man’ who made him buy cocaine.”

“What I wanted to do with my pen and my relative power was to hold administrations accountable,” he said during the question-and-answer session. “Administrations in this country, particularly administrations at those so-called elite liberal arts colleges, should never allow white boys to get off by convincing rooms full of white boys that (blacks) made them buy cocaine.”

Laymon currently teaches at the University of Mississippi. His memoir “Heavy” won the Andrew Carnegie medal and was named one of the best books of 2018 by The New York Times, NPR, Publishers Weekly and more. He was born and raised in Jackson, Miss. “Terrors” is directly addressed to his mother, who was also a university professor.

Laymon believes artists constantly need to evolve. He also said being a better human being starts with the idea of revision.

“We have to be able to be regretful,” Laymon said. “You can’t revise, y’all, unless you accurately assess what happened yesterday.

“Look backwards…and I guarantee you that the future will be more liberatory, more transformative, and you will be less harmful to people close to you. You can’t do that if you’re not honest about yesterday.”