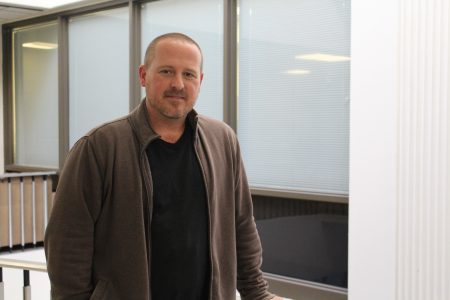 Shannon Blunt, a KU engineering professor, will be appointed to President Trump's Council of Advisors on Science and Technology.

Shannon Blunt, a University of Kansas engineering professor whose work focuses on radar systems, will soon be appointed to the President’s Council of Advisors on Science and Technology.

On Nov. 14, the White House announced its intent to appoint Blunt to the council. Blunt attended the council’s meeting on Nov. 18 as a private citizen, as he has not yet been formally appointed. He said he expects the White House will make the announcement of his official appointment sometime in the coming days, and that he will be sworn in at the council’s next meeting.

Each presidential administration establishes its own iteration of the advisory council, according to the council’s web page. The current council was established in October. It will meet in person quarterly, Blunt said.

“I’m really looking forward to it,” Blunt said on Monday. “Anything I can do to serve the country, I’m very willing to do and interested in doing.”

Blunt will be the ninth person to join the council, and one more member is expected to be named in the future.

Arvin Agah, dean of KU’s School of Engineering, said the school is proud of Blunt and that his appointment elevates KU’s research profile.

“Professor Blunt is a globally renowned researcher whose work benefits society in meaningful ways, and he is a terrific choice for this important advisory position,” Agah said in a Nov. 15 KU press release. “We are proud of Professor Blunt and look forward to his contributions to this council and the nation.”

Blunt has done work on the federal level before. Prior to working at KU, Blunt spent three years in the Radar Division of the U.S. Naval Research Laboratory in Washington, D.C. He said he thought he was chosen for the council because he had experience working in both the federal government and academia.

But he also said a connection to the White House’s top science adviser, Kelvin Droegemeier, might have helped him out.

Droegemeier used to serve as vice president for research at the University of Oklahoma, Blunt said, and he was familiar with Blunt’s radar research.

One of the council’s main goals is something that Blunt has expertise in: developing a closer working relationship between academia and the national laboratories. Blunt said he frequently helps his students find internships or full-time employment at national laboratories. During his time on the council, Blunt also hopes to promote electrical engineering as a career path, especially to women.

“They are all viewed as things that are going to be game-changing technologies,” Blunt said. “What can the government do to basically help the country be in a position to make the most use of them?”