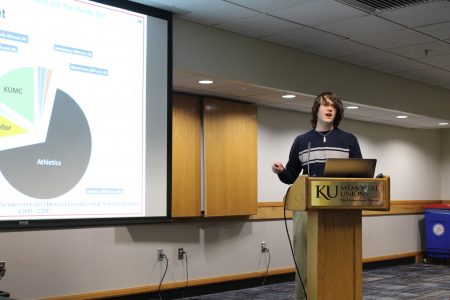 Wesley Cudney, president of KU Against Rising Tuition, introduces three bills the group plans to propose to the Kansas Legislature at a Nov. 21 press conference at KU.

A group of University of Kansas students wants to get several bills introduced during the state legislature’s upcoming session in an attempt to increase transparency in higher education and reduce wasteful spending.

At a Thursday evening press conference, Wesley Cudney, a KU sophomore and president of KU Against Rising Tuition, said the group wanted go to the Legislature because it felt its concerns weren’t being adequately addressed by the university.

“The quality of our education has been going down for many years now,” Cudney said. “… But (university officials) have simply been ignoring us. So now it’s time for the state to get involved.”

Cudney and his group drafted the three bills with help from Ron Barrett-Gonzalez, a professor of aerospace engineering at KU and a member of the American Association of University Professors, and Jeremy Hendrickson, who is the manager for a union that represents some KU staff members.

One of the bills, titled “Prohibition of Luxury Water and Air Travel by Public University Employees,” takes aim at KU’s private jet — Barrett-Gonzalez and KU Against Rising Tuition have called for the university to sell the jet in recent years. The bill would prohibit public university employees from taking university-sponsored flights in private jets and would require universities to sell off any jets they already own. The bill would also apply to boats that are worth more than $250,000.

Another bill would require public universities to gradually restore salaries for longtime employees who have taken pay cuts since 2009. The bill would apply to anyone who had been employed full-time at a public university for at least 10 years.

And a third bill would require all public universities to publicly disclose large construction projects — those that would cost more than $2 million over a period of five years — before the university administration formally approves them.

Barrett-Gonzalez said Thursday’s event was originally supposed to be a round-table discussion including Chancellor Douglas Girod, but that Girod had to cancel his appearance because of an illness.

But Barrett-Gonzalez said the group still needed to present its plans Thursday night in order to stay on track.

“We have to get the word out now,” Barrett-Gonzalez said. He said that the group has been talking with several legislative aides about the bills’ wording and the process for introducing them.

“We are working on approaching a number of lawmakers,” he said. “The idea of saving money for the taxpayers and the people of the state is pretty much a common theme that cuts across both aisles.”

Hendrickson said he was impressed by Cudney and his group taking action at the state level.

“I’m lost for words because I’ve never seen it done before,” he said. “How often do you see a student draw up a bill?”